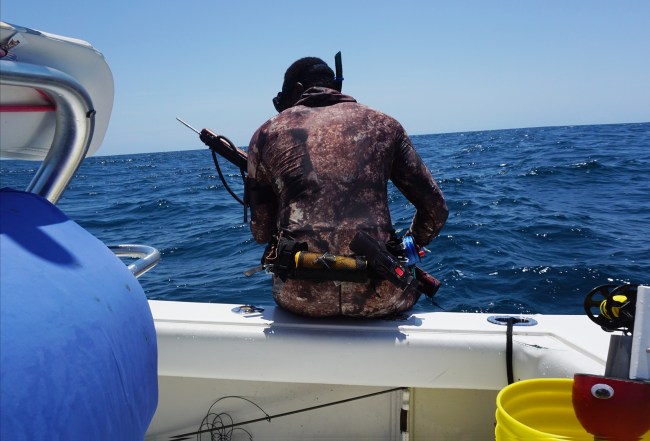 In reality, fishing isn’t all that far off from hunting but the optics of how the two sports are perceived are pretty different. You’re out there stalking an animal (fish) and trying to capture it, often to eat. When you put a pole spear or speargun in a fisherman’s hands the lines are blurred so much it’s really hard to discern what makes spearfishing not just ‘hunting‘ aside from fish being the target species.

I’m making this point because sometimes when you’re hunting big game (dangerous predators) it’s hard to know who is the hunter and who is the prey and the same can be true in spearfishing because there are almost always sharks lurking around. The water is often murky because the sand and rocks are getting kicked up by waves against coral reefs. Sharks smell blood in the water and they show up ready to grab an easy meal.

I came across this video over on The Inertia and it’s actually from a year or two ago but I figured I’d put it on your radar today because the video is going viral again for some reason. They’re spearfishing in The Bahamas and the one guy with a GoPro on his head dives down to the reef to shoot a fish, succeeds, and the commotion spooks a shark who then darts across the water and bites his friend in the head.

That shark comes out FAST and startled. Not exactly a situation you want to find yourself in when there’s fish blood in the water.

I think one of the wildest parts about this video, to me, is the color of the water. That looks like Florida’s green water and not the sapphire blue water I’m used to seeing in The Bahamas. I have no idea if that has any bearing on shark’s sight or behavior but it’s just an observation that I took notice of.

Spearfishing is one of the coolest ways to catch fish. Growing up in Florida it seemed like all of my friends went through phases where they grew jaded by regular rod-and-reel fishing and got deep into spearfishing because it was more of a connection with the fish.