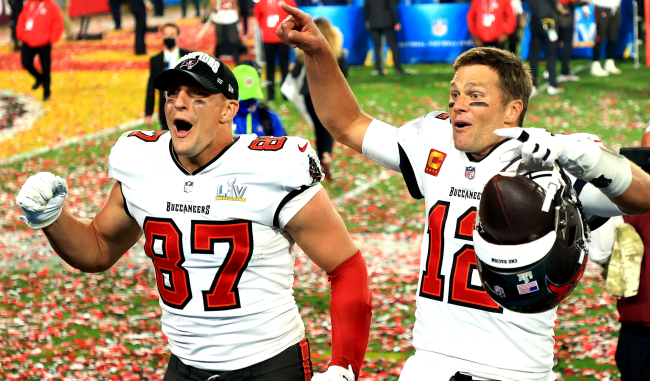 Multiple sportsbooks have come forward claiming that Tom Brady’s plan to come out of his very brief retirement was leaked before the quarterback made his announcement.

Reportedly, a number of sportsbooks in Las Vegas took sizeable bets on the Tampa Bay Buccaneers to win next year’s Super Bowl in the days leading up to Tom Brady’s big announcement.

Related: Sportsbooks Claim Insiders Knew About Tom Brady’s Comeback Based On A String Of Suspicious Bets

Now, one of those sportsbooks, Westgate SuperBook, wants an official investigation to be conducted into the possible use of inside information in relation to those wagers.

The Las Vegas Review-Journal reports Tampa Bay had 60-1 odds at Westgate SuperBook to win the 2023 Super Bowl on the Thursday prior to Brady’s announcement. The Buccaneers were also given 30-1 odds to win the NFC when a bettor placed a significant wager on Tampa Bay to win both the NFC Conference as well as the Super Bowl next season.

When Westgate SuperBook lowered Tampa Bay’s odds to 25-1 to win the Super Bowl, that bettor placed another wager.

“There’s not a doubt in my mind that they knew he was coming back when they placed those wagers on Thursday,” said Westgate SuperBook vice president Jay Kornegay. “And these were not casual bettors. They would be categorized as educated bettors. It wasn’t a guy with a Tom Brady jersey at the counter. It was a player that we would describe as sharp. With that type of play and the announcement we heard (Sunday) that he was unretiring, there was information that was shared prior to his official announcement.

The sportsbook at South Point also received some conspicuous wagers on the Buccaneers prior to Brady’s comeback reveal. They report that someone bet “big money” on Tampa Bay to win the Super Bowl on Thursday at 50-1, then made two more big bets on the Buccaneers at 30-1 and 25-1.

Brian McCarthy, NFL vice president of communications, said the league, as they almost always do, had no comment on the issue.

“If it was Jameis Winston at quarterback, we wouldn’t have a problem with it,” Kornegay added. “But when it’s Tom Brady you have a six-figure liability with, we’re certainly not comfortable with it. That’s a biggie. It’s not about a player being in or out of a game tonight. You’re talking about the best quarterback of all time playing or not playing.”

One person who certainly was not privy to any kind of inside information regarding Tom Brady’s return was the poor sucker who paid over $500,000 for the quarterback’s “final” touchdown football.