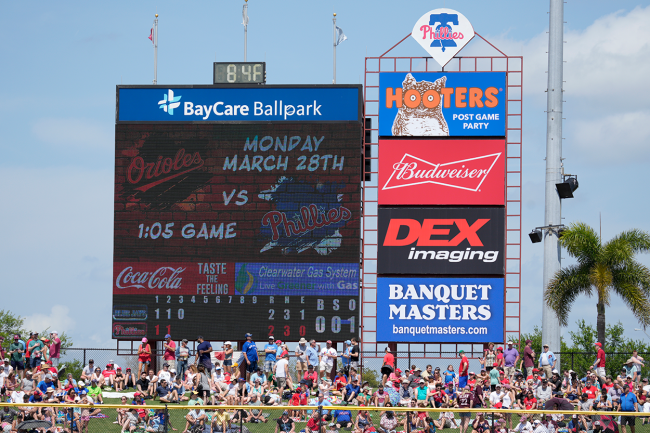 After a tumultuous offseason that looked like it would never end, Major League Baseball is back. Both the Cactus and Grapefruit Leagues have begun the spring training schedules and the big leaguers are getting back into the swing of things. (Get it — swing of things?)

While spring training offers veterans an opportunity to ease back into the game, it allows young prospects and new incomers to prove their worths and make a case to make the Opening Day roster. For fans, it allows the chance to get out in the warm weather, drink a few beers under the sun, and enjoy America’s favorite pastime without any worries about winning or losing.

It’s fun, it’s easy and it’s relaxing. Well, one Philadelphia fan has taken things to the next level.

The organization holds its spring training camp at BayCare Ballpark in Clearwater, Florida. It is pretty much always 70+ degrees and sunny in Clearwater this time of year and over the last two days, it has been glorious.

When the NBC Sports Philadelphia broadcast cut to the shirtless, sunbathing fan out in the grass on Wednesday, the announcers noticed that he looked familiar. The same man, wearing the same clothes, was in the same spot, laying the same way during Tuesday’s game as well.

Meanwhile, in the stands, the Philadelphia fans were already in midseason form.

A fan just got captured saying "Shut up Fat Ass!" during the #Phillies broadcast LOLOL pic.twitter.com/9R24aTua88

Spring training is just the best. You never know what you’re going to get!