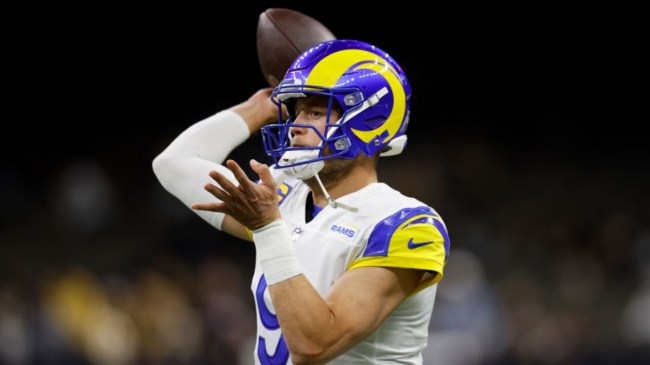 The Los Angeles Rams have been hit hard by injuries over the past few weeks. In Week 9, Matthew Stafford suffered a concussion that kept him out for Week 10. In Week 10, Cooper Kupp suffered a high-ankle sprain that will cost him at least 6 weeks and potentially the rest of the season.

Stafford returned from his concussion for the Rams’ Week 11 matchup against the Saints, but he now once again finds himself in the concussion protocol. He has already been ruled out for Week 12 against the Kansas City Chiefs, but it turns out that the concussion might not be the reason why.

Today, Sean McVay revealed that Stafford felt numbness in his legs after taking a hit during the loss to the Saints and is currently dealing with a neck injury.

Sean McVay said after a hit Sunday, he felt numbness in his legs.

He had further testing Monday. He is in the concussion protocol. McVay can't say whether he has a concussion; calling it a neck issue as team evaluates.

McVay said that Stafford isn’t still experiencing the numbness, but the team hasn’t ruled out th possibility of him being shut down for the rest of the season.

McVay said as of now, Stafford is not feeling that numbness.

Rams will "take a week at a time"; McVay does not rule out shutting Stafford down for rest of year.

With the Rams currently on the outside of the playoff picture with a 3-7 record, it wouldn’t be all that surprising to see the Rams take a very cautious approach to this next injury and shit Stafford down for the year.

It doesn’t make much sense for them to risk further injury to their star quarterback when there isn’t much of a chance of the team making the playoffs.

Without their 1st round pick for next year, it will be tough for the Rams to start looking toward the future, but that just might need to be their approach with two of their biggest stars dealing with injuries.