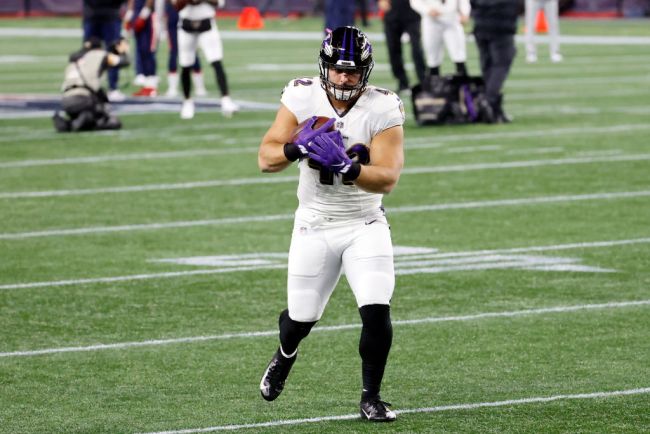 When a delivery person drops off food at your door and you didn’t order it, what do you do? What do you do? Quite the conundrum. Particularly so, if you’re starving and have been eating nothing but struggle meals for months. The right thing to do is inform the delivery person and allow the intended recipient to enjoy their food. The wrong thing to do is accept the yum-yums and chow down on them – especially if you’re snatching the food of a 6’3″, 284-pound NFL fullback.

On Wednesday night, Pro Bowler Patrick Ricard ordered a meal from Outback Steakhouse and had it delivered by DoorDash. Much to his chagrin, Ricard watched his dinner get delivered to his neighbor’s house.

“Woooow, my neighbor straight up stole my DoorDash,” Ricard wrote on Twitter. “Have a pic of it sitting on his doormat. Knock on his door for a solid 10 mins. Finally comes out and we talk. Already had my dinner on a plate.”

“I mean I get it, free food just comes to your door, why not?! At the end of the day, just please be a good person and don’t touch it. If it’s not yours, it’s not yours,” the Baltimore Ravens fullback said.

He noted that he got his appetizer and dessert back, but not his entree. Let’s hope he enjoyed his Bloomin’ Onion and New York-style cheesecake drizzled with salted caramel sauce.

Luckily for the meal thief, Ricard is a reasonable man who doesn’t get hangry and drop-kick the steak bandit.

“After talking it out, we are cool now,” he tweeted. “I have officially met my neighbor, so there’s that.”

I mean I get it, free food just comes to your door, why not?! At the end of the day, just please be a good person and don’t touch it. If it’s not yours, it’s not yours.

Ricard’s Ravens teammate Ronnie Stanley presented a way for the meal stealer to make it up to the bruising fullback.

DoorDash and Outback Steakhouse stepped in and did the right thing, and snagged some free publicity at the same time.

Looks like I’m going to be ordering from @Outback more often 🔥👏🏼 https://t.co/WGhcG1TIH4

Let’s hope the big man got his food the second time, hopefully it wasn’t intercepted.

Ok, let’s go for a round 2 of ordering DoorDash tonight… wish me luck pic.twitter.com/YmeB3oVDoH