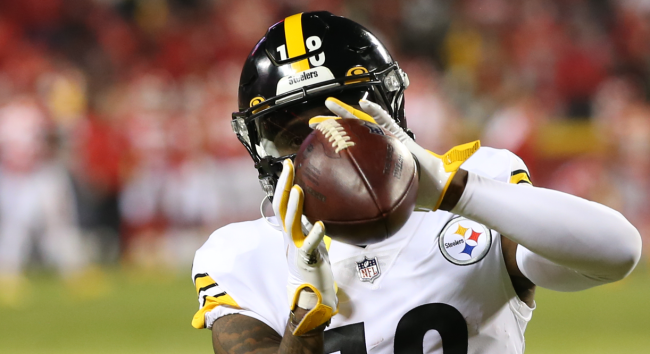 Diontae Johnson of the Pittsburgh Steelers had himself a heck of a year in 2021. After catching 107 passes and making the Pro Bowl, the wide receiver, signed a two-year, $36.71 million contract extension last week.

The FlexWork Sports Youth Camp presented by Diontae Johnson was held on May 22, 2022 at Cupples Stadium in Pittsburgh.

230 kids aged 6 to 16 were in attendance on that day to learn more about football. Unfortunately, the one person who was not in attendance was Diontae Johnson, according to a lawsuit recently filed in the U.S. District Court for the Western District of Pennsylvania.

The Pittsburgh Post-Gazette reports that for a $125 admission fee, campers were supposed to receive a “team photo” with Johnson and had the option of paying extra for more interaction with the Steelers’ wideout.

For an additional $99, campers were to get a 8×10 one-on-one photo with Johnson and a hand signed photo of Diontae at the camp.

The $249 upgrade package was supposed to include going on-on-one against Johnson in a QB/WR drill in addition to the photos.

For $149, one or two parents were allowed to get a one-one-one photo with Johnson during a meet and greet, as well as a hand signed photo of Diontae.

None of that happened, says FlexWork Sports Management LLC.

They claim that Johnson not appearing at the camp bearing his name cost them “significant damages, in the form of refunds, credits, and reputational damage.”

The lawsuit claims that at 9:47 a.m. on May 22 — just 13 minutes before the start of the camp – one of Johnson’s agents texted to say the wide receiver’s flight had been canceled and he would be arriving later than planned.

Later, the agent informed the FlexWork that Johnson had decided he didn’t want to wait around for another flight so he wouldn’t be coming.

“As a result of Johnson’s breach, FlexWork has suffered and continues to suffer damages in an amount to be determined at trial, plus interest, costs, disbursements and attorneys’ fees,” the complaint reads.

According to a personal service agreement with Johnson he owes FlexWork a cancellation fee of $2,250 plus all expenses incurred. The company states they reimbursed $36,099.33 in registration fees, plus issued that much in credits, and spent more than $10,000 on expenses for the camp.

The same day the report of the lawsuit was published, Johnson posted the following tweet.

The Devil is out working.. stay prayed up 🙏🏾

Fans were quick to comment, blasting Johnson for no-showing the camp.

Pretty sad that this guy does not care about all the little kids that were looking forward to meeting him. You are one selfish individual @Juiceup__3 because you didnt want to wait for a second flight! https://t.co/PFITlCGWKd

How about stop breaking agreements and then tweeting like people are persecuting you. Its an old tactic, but you're young so it makes sense why you'd go there. Be better. https://t.co/djyX5KaHIY

This reminds me of tweets by AB back in the day... https://t.co/jBOJmVxGiG