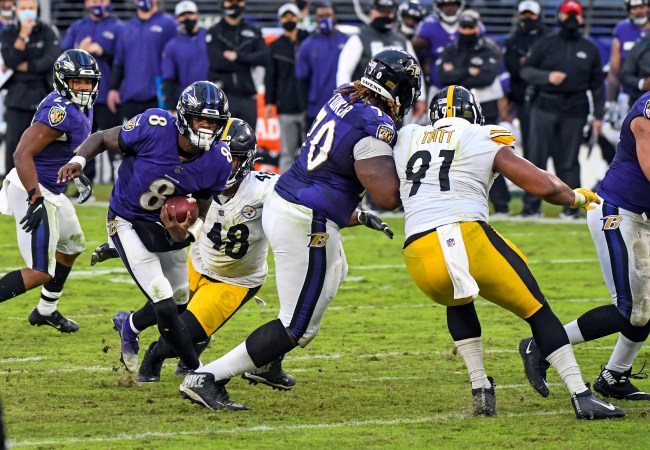 Earlier this week, the Steelers-Ravens game was postponed from Thanksgiving night to Sunday after several Ravens players tested positive for Covid-19. It now appears that the rescheduled game on Sunday is in jeopardy of being played after it was revealed that Lamar Jackson and four others in the organization had tested positive for the coronavirus.

According to ESPN’s Adam Schefter and The Athletic’s Jeff Zrebiec, the Ravens had four more players and another coach test positive for COVID-19. That would seemingly include quarterback Lamar Jackson, who was reported to have tested positive Thursday.

The NFL continues to monitor developments, but as of now, there's no change to the status of the #Ravens–#Steelers game, per source. It's still set for Sunday, after the prior postponement from tonight.

Game Sunday still on for now, but chances of it being played are diminishing quickly.

According to ESPN’s Adam Schefter a league source told him there’s “no way” the Steelers and Ravens will be able to play on Sunday.

One source on Sunday’s scheduled Ravens-Steelers game: “No way it can be played.” https://t.co/Y1lfV4XBao

On Wednesday the Ravens announced that they had disciplined a member of the coaching staff who violated Covid-19 protocols and may have been the cause of the outbreak.

Statement from the Baltimore Ravens. pic.twitter.com/EjDmDSt2Ky