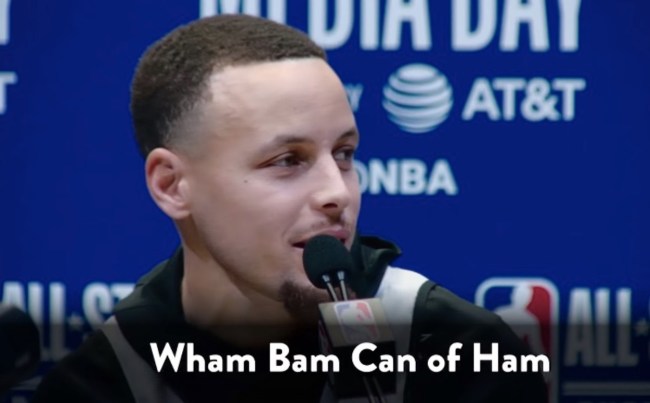 Stephen Curry is a North Carolina man through and through. He was raised in Charlotte and went to school at the prestigious nearby Davidson College. His dad played for the Charlotte Hornets for a decade (1988-1998).

It’s not easy to upstage Steph in his hometown but that’s exactly what Joe Harris did by beating Curry in the 3-point Contest finals after nailing every ‘money ball’ on the rack. Elsewhere, Stephen Curry was a de-facto ambassador for the city of Charlotte. You could find him on camera giving interviews all weekend.

Anyone who was watching closely might’ve noticed that Steph Curry was peppering in some very strange answers into his interviews. He used the phrases ‘Energizer Bunny’, ‘Flipping Pancakes’, and ‘Wham, Bam, Can of Ham’ several times. This didn’t make a whole lot of sense at the time but Jimmy Fallon has just revealed that it was all part of a bet with Steph Curry to see if he could pull this off without anyone noticing.

In the MTN DEW 3-Point Contest, Curry drained 24 in the finals while Joe Harris of the Brooklyn Nets was able to put up 26 for the win and edge Steph by 2. Buddy Hield was in third with 19.

After watching that clip a handful of times I’m a little shocked by how easy it was for Steph to slip in ‘Wham, bam, can of ham’ into an interview. I’m now feeling like this is a grossly underused phrase that should make its way into the mainstream. Hopefully, too many people don’t see this clip and realize it was all part of a bet and Steph actually goes on to create some sort of Pop Culture catchphrase phenomenon with this one. It deserves more respect.