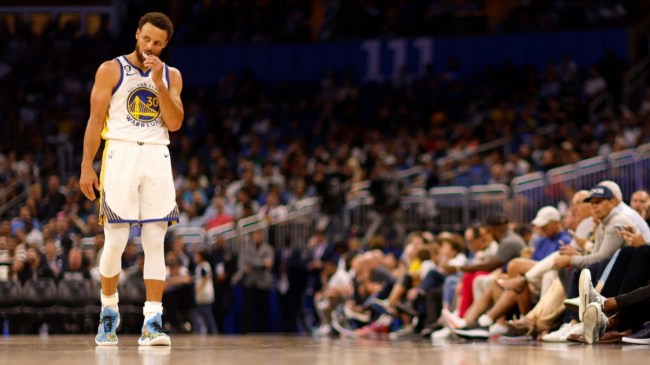 The Golden State Warriors have not had the strongest start to their NBA title defense. The defending champs are in the midst of a 4-game losing streak and currently hold a record of 3-6.

The losing streak has been a pretty big surprise as it hasn’t come against the best competition. They started with a loss to the Hornets, who are currently 3-5. They followed that up with an even worse loss by 14 points to the Detroit Pistons, who hold a 2-7 record.

Even the Heat are currently under .500 and claimed a win over the Warriors on Tuesday.

However, last night’s loss may have been the worst of all. The Orlando Magic are in the midst of a rebuild and entered last night’s game with a 1-7 record and no starting point guard because of injuries to Markelle Fultz and Cole Anthony.

The Warriors still couldn’t get the job done despite leading by 12 at halftime.

In the midst of the disappointing performance, it appeared that frustration was beginning to set in.

There was a moment during the 3rd quarter where James Wiseman went to set a screen for Steph Curry in an attempt to create space on the wing. The screen wasn’t particularly effective and Wiseman didn’t roll hard to the basket after the screen.

Both players can be seen expressing their frustration in the clip as Curry shakes his head at Wiseman and Wiseman shows his disappointment at not receiving the ball.

steph frustrated as wiseman sets a screen with no urgency, watch wiseman's reaction when he doesn't get the ball pic.twitter.com/SFzxgLz51s

The play ends with Curry attempting a contested 3, which he does not make.

There’s plenty of reason for the Warriors to be frustrated right now. The Warriors aren’t just losing. They’re losing to bad teams and they’re doing it while playing no defense.

The Warriors need to get their defense figured out quickly or they could have a very disappointing follow up to their NBA title.