Stephen A. Smith Returned To ‘First Take’ In A Ridiculous Orange Jacket And Got Roasted So Hard 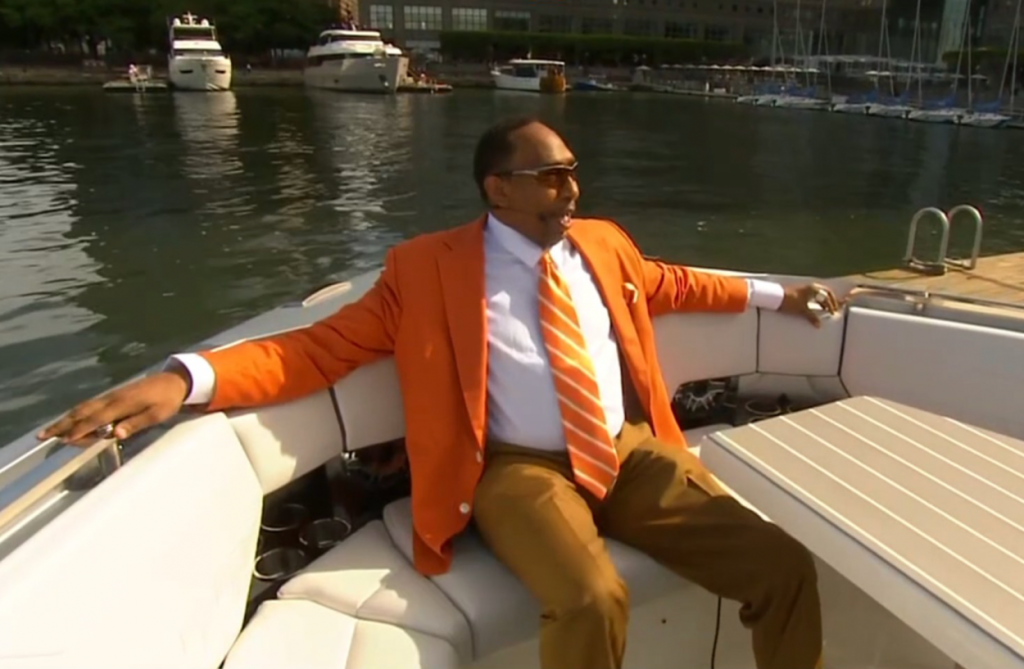 Stephen A. Smith has been noticeably absent from ESPN’s First Take for most of July and August. He previously took to Twitter to explain that he was rehabbing shoulder surgery due to a partial tear of his rotator cuff AND his bicep, two extremely painful injuries.

Stephen A. Smith is/was a daily fixture on First Take prior to his hiatus for physical rehab but he made his triumphant return on Monday morning only to get roasted by his colleagues and the sports world. Smith wore a bright orange jacket that had him looking like Lloyd (Jim Carrey) from Dumb & Dumber.

The resemblance was uncanny and it was a comparison that pretty much everyone made the instant they saw Stephen A. Smith show up on camera wearing the hideous bright orange jacket. For his big return, Stephen got his ESPN colleague Adam Schefter to fake report Stephen’s reemergence. And it was that moment that led to Stephen getting roasted by all.

Stephen A. Smith Returns To ‘First Take’ Looking Like Lloyd From Dumb & Dumber In An Orange Suit.

Is that a Cleveland Browns orange? I honestly can’t even tell. Why is he on a boat and not in the office? Did he intentionally wear that orange like Jim Carrey/Lloyd just to get the memes rolling? The people have lots of questions.

The Dumb & Dumber jokes started rolling in fast and the memes were excellent.

This one really works because of the pants…

Is Stephen A. Smith a Tennessee fan? Am I missing that in all of this? I’ve never heard him talk about UT before. There has to be some explanation.

Stephen a smith told the first take producers get me on a yacht or I’m taking my vacation lmao pic.twitter.com/HKbbt29NmN

People threw out some alternative ideas of what Stephen A. Smith was dressed as:

That is the greatest Thanksgiving dinner suit I have ever seen.

And a belated Happy Creamsicle Day to you, sir.

Everyone on Twitter that’s talking about how wild it is Stephen A. Smith got ESPN to put them on a yacht must be forgetting that he makes around $12 million each year, $8 million from ESPN and $4 million for a production deal. The guy makes more money annually than most make in a lifetime. I’m actually surprised they didn’t put him on a much bigger yacht, perhaps one that’s owned by one of the NFL team owners.

It’ll be nice having Stephen A. Smith back. First Take has been dull for weeks.

Jokes about Stephen A. Smith in the Senate write themselves 😂 https://t.co/fTAyyQrKhc