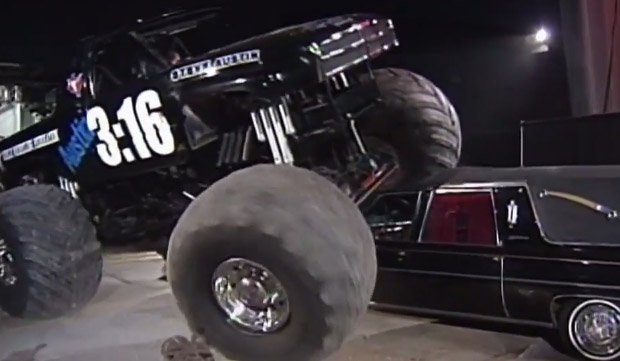 Anyone who watched the WWE (WWF back then) during the Attitude Era knows how wild things got at times.

During that time the man leading the charge most of the time, WWE legend “Stone Cold” Steve Austin, was never far from the spotlight when things appeared to go completely off the rails.

Driving a beer truck to the ring and spraying everyone with it? Stone Cold.

Rolling into the arena on a Zamboni? Stone Cold.

Using a forklift on Triple H and his car? Once again, Stone Cold.

Austin most definitely enjoyed the use of assorted vehicles to get his point across back in the day.

One other such vehicle was a black Austin 3:16 Monster Truck, which Austin used to crush The Rock’s car as well as a limo parked inside the arena.

Turns out, according to Austin on a recent episode of his podcast The Steve Austin Show, that little stunt almost got him dead.

“So I go into the back door of the arena and I’m in a holding room with a couple of curtains in front of me. The monster truck was loud as fuck and that 1800 horsepower motor is churning out exhaust fumes. So I’m in this room and they shut the door behind me. It was about a three minutes commercial break, so the whole time the people back home are watching commercials, I’m in a room, inside a truck, breathing methanol/alcohol fumes — I could barely breathe. I was just begging for the show to come back on air so I could charge out in the audience and get a breath of fresh air. I’m breathing all those exhaust fumes, motherfucker, I was going to crash that gate doing 98 [miles per hour] and go and take my own cue and haul ass into the arena, if they hadn’t of cued me when they did — I was about to die.”

Goddamn, I really miss those days.