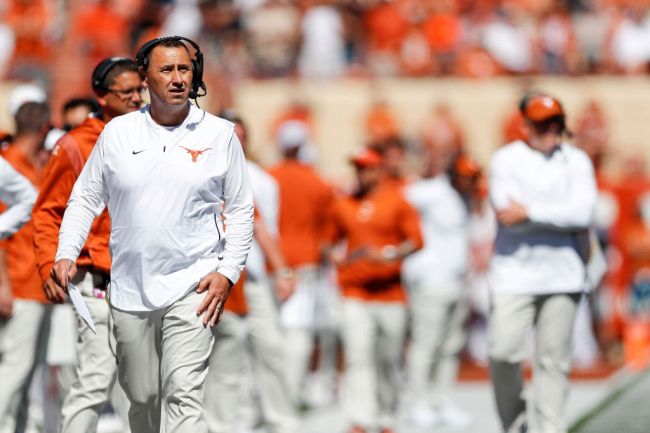 The most bizarre sports story of 2021 involving Texas assistant coach Jeff Banks, his stripper girlfriend, and her pet monkey apparently isn’t a distraction to the team. At least, that’s what Texas head coach Steve Sarkisian is saying.

You can catch up on all the unbelievable drama involving said monkey and the stripper here, but the must-known details are as follows: Gia, the white face capuchin monkey, allegedly bit a trick or treater on Halloween night. The monkey’s owner, who is well known as ‘The Pole Assassin’ isn’t denying that the incident happened, but has said nobody was viciously attacked.

But again, Sarkisian doesn’t think that this story will serve as a distraction for his team.

Sark passes when asked about the monkey story involving an assistant coach. Says that's a personal matter. Does not discuss personal matters in public. "Not a distraction at all."

I think if you’re a member of Texas’ football team, this story is absolutely impacting you. It’s not necessarily impacting you in a negative way, but you better believe every single player and staff member has made jokes about this situation all week long.

Hell, this story has nothing to do with me at all and it’s affecting me. Never have I read more about a monkey or a stripper (don’t tell my wife) in all my life.

Folks on social media aren’t buying Sarkisian’s remarks saying that the situation isn’t a distraction, and rightly so. Here are some of the best tweets in response to Sark’s comments:

“Not a distraction at all.” pic.twitter.com/TfiAl9TjIz

Glad to know I’m not being a distraction. https://t.co/k0v4UrhPzF

It's very important that we all respect the monkey's privacy at this time https://t.co/Sew0dceGH4