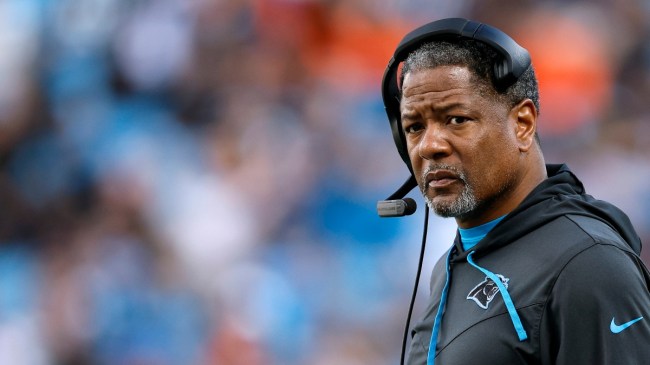 The Carolina Panthers found a way to defeat the Seattle Seahawks, giving them a two-game win streak. However, after the contest, interim head coach Steve Wilks may have called the franchise out.

Wilks seemed fired up after the win as he is clearly proud of his team for battling through the adversity. For that reason, he very well could have taken a shot at the front office.

According to Sheena Quick, the Panthers interim head coach loved what he saw from his team against the Seahawks. He called it a “pretty thrilling and emotional” win for his squad. However, he begins rambling off the adversity guys on the team have gone through this season. In doing so, he mentions “the organization trying to tank it.”

Steve Wilks says today’s win was “pretty thrilling and emotional” after all the team has been through with coach changes, player departures, and rumblings the #Panthers were trying to tank. pic.twitter.com/B8i836R3tx

Let’s face it. Most of us have had the Panthers as one of the worst teams this season once they traded away Christian McCaffrey. Many were hopeful Baker Mayfield could resurrect his career in Carolina, but that turned out to be a failed experiment. At the end of the day, this team is 5-8 and just one game back in the NFC South race.

Maybe the organization is trying to tank, or maybe they aren’t. Either way, it’s pretty shocking to hear the current head coach call out the front office and the organization like that. We’ll see if the Panthers respond to it, but you’d think ownership would be pleased with the fact they’re in the playoff hunt this season. Even if it’s because the division is a mess.