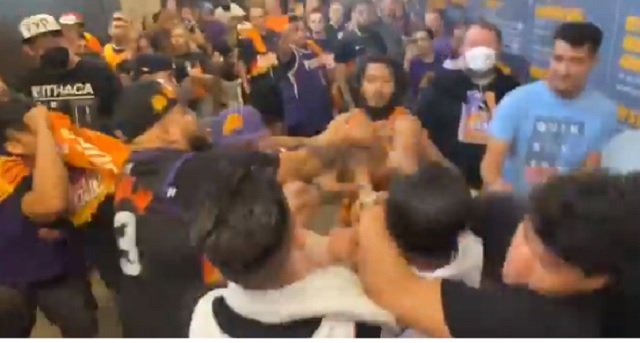 After “Suns in 4” guy went viral for fighting a Nuggets fan other Suns fans are ready to throw down at a moment’s notice.

On Sunday a video of Suns fans getting into a heated exchange with a pair of Clippers fans leaving game 1 of the Western Conference finals made its way on the Intenet.

In the video, several Suns fans could be heard yelling “Suns in 4” in the background before a Clippers fan decided to throw a sucker punch which led to an all-out brawl.

Thankfully no one seems to have gotten seriously hurt but people are surely going to start blaming Devin Booker for rewarding Suns fans for getting into fights.

Y’all think DBook or any player will gift these guys too? We shouldn’t be rewarding this kind of behavior ! https://t.co/aRGxf3HbVl

Give a dude a jersey and tickets now everyone wants the same treatment. Its like when people tried to put gorilla glue in their hair looking for sympathy. This is just sad. https://t.co/pkC4uhK1Vh

This is what the @Suns and @DevinBook promote. Congratulations on becoming the worst fan base in the NBA. https://t.co/Zb8tJFnO2C