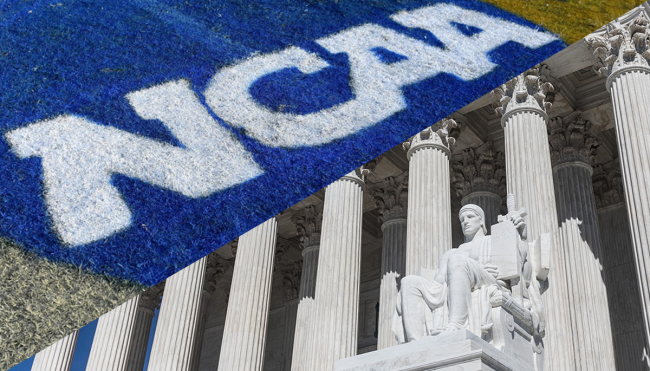 As you’re probably aware, the United States currently has a scorching political climate that rivals the depths of hell. As a result, it’s pretty hard to find an issue that people on both sides of the aisle can get behind.

However, there is one tiny glimmer of hope thanks to one of the only opinions it seems like the vast majority of Americans share: the NCAA suuuuuuuuuuucks.

The organization has spent more than a century ruling college sports with an iron fist while valiantly defending the great lengths it’s gone to in an attempt to make life as difficult as possible for the student-athletes it profits from in the name of “amateurism.”

While it may have taken far too long for the country to wise up to its unsavory tactics, the tides have changed in a big way since California passed a piece of game-changing legislation permitting players to profit from their name, image, and likeness in 2019. Since then, a number of other states have followed suit and Congress has floated federal legislation addressing the problem as the NCAA scrambles to come up with a stopgap.

In March, it appeared the NCAA was possibly facing an existential threat in the form of a lawsuit accusing the governing body of violating antitrust laws that made it all the way to the Supreme Court. After the justices tore the organization a new one during oral arguments, it seemed very unlikely they’d be ruling in its favor, and on Monday, it issued a unanimous ruling that could permanently alter the landscape of college sports.

The justices did not hold back in the opinions they penned upholding the ruling of a lower court, which essentially take a wrecking ball to rules and restrictions the NCAA has used as a foundation for the majority of its existence.

In unanimous ruling, the United States Supreme Court rules against the NCAA in the Alston case. This is not the end of amateurism, but it chips away at core aspects of it and sets precedent that the NCAA is not special and is subject to normal applications federal antitrust law. pic.twitter.com/47wbzrJDgQ

"Traditions alone cannot justify the NCAA’s decision to build a massive money-raising enterprise on the backs of student athletes who are not fairly compensated…The NCAA is not above the law."

– A unanimous slam dunk for NCAA college athletes from the US Supreme Court pic.twitter.com/So6UhcCR6H

"Before conjuring hypothetical concerns in this Court, we believe it best for the NCAA to present any practically important question it has in district court first."

The NCAA as we know it died this morning. https://t.co/GQugMcA2e5

So what does this all mean? It’s worth stressing the ruling in question doesn’t explicitly concern the name, image, and likeness issue but concerns impermissible education-related benefits like free laptops and paid internships that the NCAA insisted would somehow ruin college sports.

With that said, this case has the potential to be one of the most influential dominos to ever fall, as the ruling essentially suggests Teddy Roosevelt would wallop the NCAA with his big stick because its entire business model seems to be in blatant violation of antitrust regulations.

As a result, the NCAA now has to deal with the fallout stemming from this as it prepares to enter uncharted waters when players in eight states are officially allowed to secure the bag courtesy of the NIL laws that are slated to go into effect on July 1st. It might be time to start making an infinite amount of popcorn because you’re probably going to need it in the coming months.