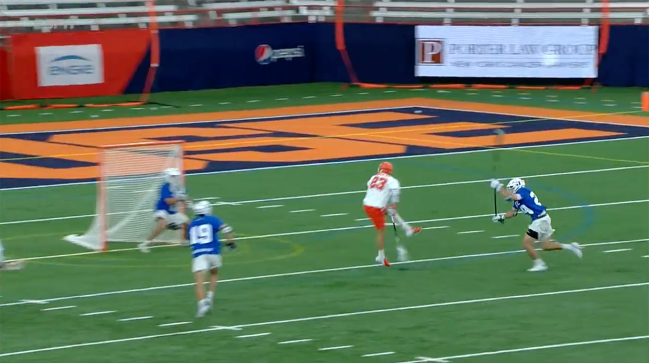 If you are not above the age of 18 years old, you need parental permission to watch this video because it is absolutely disgusting. Syracuse lacrosse midfielder Tucker Dordevic scored one of the nastiest goals that you will ever see on Saturday afternoon.

During the Orange’s 14-10 upset win over No. 10 Duke, Dordevic found himself with an open look in front of the net. After a defender brought the ball up the field, the redshirt junior cut toward the middle of the field and split two defenders to create space.

The defender found Dordevic and delivered a pass to his streaking teammate. There was only one problem — Dordevic was not in position to shoot.

But it didn’t matter.

Dordevic made a remarkably athletic move to contort his body back toward the net and planted his feet. Leaping off of one leg, he spun around, threw his other leg into the air and fired a one-handed shot between his legs. It went in and it was absolutely sick, take a look:

While the real-time, game-angle video shows the play in its entirety, it doesn’t give the full-scope of the insanity. The 4K, slow-motion video of the goal puts just how wild it was that Dordevic scored in perspective.

Syracuse lacrosse is not currently ranked in the Top 25, but if the Orange keep getting the results they want with the flashy, unbelievably athletic style that they did on Saturday, their ranking will only continue to rise.