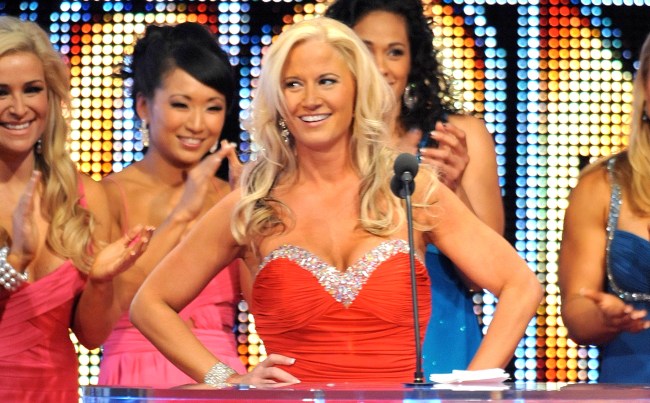 The last time we heard anything about WWE Hall of Famer Tammy Lynn Sytch, AKA Sunny, she was on her way back to the Carbon County Correctional Facility in Pennsylvania after a bench warrant was issued in February of 2019 for breaking the terms of her 2018 parole.

Sytch, who was inducted into the WWE Hall of Fame in 2011, has been arrested numerous times since on charges including… *deep breath*… violating an order of protection (multiple times), disorderly conduct, third degree burglary, failing to appear in court, contempt of court, DUI (multiple times), leaving the scene of an accident (multiple times), receiving stolen property, missing a scheduled drug test, failing to report to her parole officer, failing to maintain a stable residence, driving without a license, driving an unregistered vehicle, operating a vehicle without required financial responsibility (insurance), displaying plate card in improper vehicle, operating a vehicle without valid inspection, driving without Evidence of an Emission Inspection, consumption of alcohol in a motor vehicle, reckless driving, failure to stop at a stop sign, driving the wrong way on a one-way street, driving with a suspended driver’s license, and careless driving.

That there is one Hall of Fame rap sheet.

On February 25th, Sytch was released from prison after over a year being incarcerated and has now moved on to her next endeavor: opening an OnlyFans video account.

Sytch, who is often referred to as the Original WWE Diva, recently debunked rumors that she had to sell her WWE Hall of Fame ring with a tweet showing her wearing it on her middle finger and the caption, “If you didn’t catch my 3 previous posts, all of you dickholes who think they know everything can sit on this and spin… #notsold #neverwasgonnasellit.”

That was the FOURTH tweet she made that day using the photo, and it was the only one not involving the use of an F-bomb.

She had originally stated that she sold it, but now says it was just part of a publicity stunt for Vivid Entertainment to help sell her adult film.

According to Ringside News, this new OnlyFans venture could finally be the gig that gets her permanently on her feet financially.

“Even if every subscriber Sunny has signed up for the lowest subscription plan of $134.96 per 1/2 a year, her Only Fans is racking in $215,396 a year,” they reported. “If each of her subscribers is paying per month then she is making $287,184.24 a year. That being said, her yearly number should fall somewhere between those two figures minus 20%.”

THANK YOU TO ALL OF MY MEMBERS AND FANS FOR MAKING THIS POSSIBLE!!! Never count me out…. Let's MAKE AMERICA SUNNY AGAIN!!! Haters are welcome to grovel 😂😂😂😂 I LOVE YOU ALL SOOOOO MUCH!! pic.twitter.com/BoXrPrDR2i