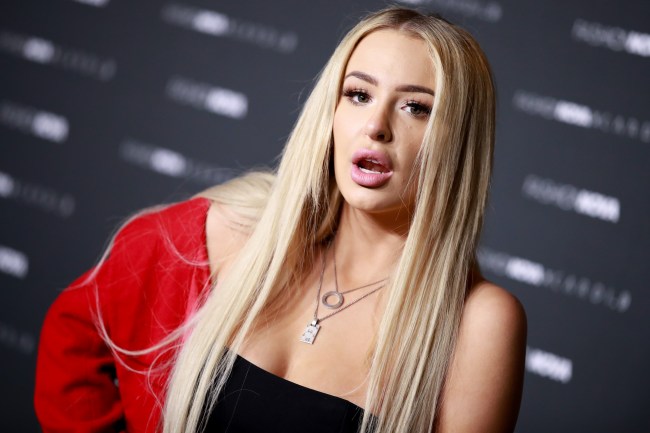 Controversial YouTuber Tana Mongeau made headlines with her latest video when she revealed that a famous athlete ditched her for a Kardashian/Jenner.

In the video, Mongeau claims she was torn between choosing the athlete or her ex-husband Jake Paul. She went on to say that she regretfully ghosted the athlete for Paul and he went on to ditch her for a Kardashian/Jenner.

Via In The Know

“He’s genuinely one of the nicest people I’ve ever talked to in my life,” she said about the athlete before further praising his charm and talent.

She said she interpreted something the athlete said to her as a “sign” she needed to choose to be with Paul over him, so she ghosted the athlete and went to Paul’s house, though the athlete invited her to go on vacation with him.

The next day, she woke up and felt bad for ghosting him, but before she could make things right, fans had figured out that she had posted a selfie to Snapchat in Paul’s bed thanks to the distinctive pattern on his headboard. That realization went viral — and the athlete took note. He told her, essentially, that they are going to be good friends, thus ending the relationship.

Just a day later, Mongeau claimed that the athlete returned to L.A. from his vacation, picked up another woman and took her back on vacation. That woman happened to be a member of the Kardashian family.

Fans immediately assumed Mongeau was talking about Kendall Jenner, who has dated several NBA players throughout the years.

Devin Booker, Ben Simmons, and Kyle Kuzma are the three NBA players that Internet detectives believe Mongeau is talking about.

BREAKING NEWS THAT WILL MOST DEFINITELY CHANGE YOUR LIFE: Tana Mongeau fans speculate who is professional athlete that left Tana for Kardashian. This fan thinks it’s LA Laker Kyle Kuzma. This is not confirmed, however Tana duetted this TikTok bringing more attention to theory. pic.twitter.com/MDQQvzzhSM

@tanamongeau eludes to have ghosted a successful 'athlete' (@BenSimmons25 ) who quickly rebounded to a Kardashian/Jenner clan member (@KendallJenner ) in her new storytime based way back from 2019. thank you, @DailyMailCeleb !

The nba player is Kyle Kuzma or Devin Booker. 😭😭😂 pic.twitter.com/QCbEpdzVLf