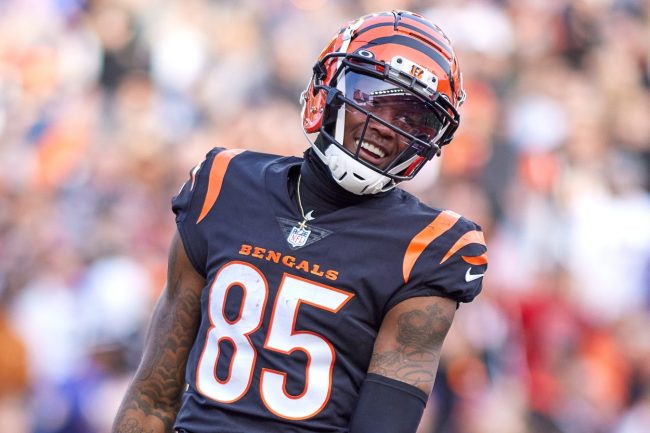 A Bengals fan who loves Call of Duty is currently in Kansas City for the AFC Championship in part to his friend Tee Higgins. Max Hulett and his girlfriend Shelby Sterling were flown out to the game by the Cincinnati wide receiver to celebrate their nine-year anniversary.

Hulett and Higgins started playing ‘Call of Duty’ together a few months back. Their unexpected, online friendship quickly blossomed and now they play video games with one another a few times a week.

Earlier this week, Higgins did a promotion through social media where he was giving away tickets to the game. Hulett didn’t win but he already had tickets and was planning to drive himself and Sterling to the game.

While chatting in an online gaming channel about his plans, Higgins overheard that it was their anniversary and that they were planning to drive the eight hours to Missouri. In turn, he offered to pay for two plane tickets to Kansas City and then back home to Cincinnati.

Have to give my boy @teehiggins5 a shoutout!!! I have been jumping up and down for two days! He found out me and my girl were driving for our anniversary to KC and upgraded us with flights!!!! @Bengals get this man a lifetime contract!Not only a great guy a great WR #WHODEYNATION

Sterling and Hulett spoke about how things played out on Saturday and could not have been more excited about the game. They are Higgins fans for life.

WHAT A DREAM! WHO DEY! And I can’t wait for tomorrow! Happy anniversary @HulettMax @Bengals WE LOVE TEE FOREVER AND ALWAY pic.twitter.com/z7L1xBpcmB

The only way that things could get any better for Hulett and Sterling is if the Bengals win and if Higgins finds the end zone during the game. All of this happened because of Call of Duty.

Shoutout to Tee Higgins for being a real one.