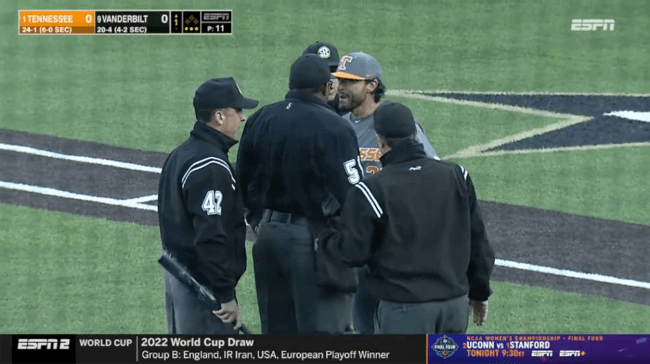 The biggest college baseball series in Tennessee history is unfolding in Nashville this weekend and it got off to a hot start on Friday. No. 3 Vanderbilt is hosting No. 1 Tennessee at Hawkins Field and Game 1 went in favor of the Volunteers.

However, despite the final score, it didn’t start off that way.

Jordan Beck, the third batter of the top of the first inning, went yard on a solo shot to give the visitors a 1-0 lead. Or so it seemed.

What happened next with Tennessee’s bat was rather bizarre.

Commodores head coach Tim Corbin called for a review of the bat that was used to hit the dinger.

A conversation ensued between the umpires as they took a closer look at the bat. After a fairly lengthy deliberation, they decided to call Beck out and overturn the home run for using an “illegal bat.”

JORDAN BECK HOME RUN JUST GOT CALLED BACK TO NO STICKER ON THE BAT. OMG pic.twitter.com/dcmoz5NmNr

Tennessee head coach Tony Vitello, of course, was not happy. He proceeded to get up in the faces of the umpire crew and was fuming.

He wanted the bat.

Prior to every game, every bat is checked and approved. Once approved, it receives a sticker.

The bat that Beck used to mash his tater had a sticker, but it was from a mid-week game— not the pre-game approval on Friday. In turn, the run didn’t count and the the batter was called out.

The bat clearly had a sticker on it… wtf is happening. pic.twitter.com/aRfSlpVss5

The entire situation was rather unprecedented, even after Corbin explained why he called for the check.

Tim Corbin explains why they checked the bad. Says it’s been the conversation around the SEC this week. pic.twitter.com/fV6Qj4YaxX

Not long after the first home run was called back, Tennessee went yard again and, upon crossing the plate, the batter immediately grabbed his bat to taunt the Vanderbilt dugout.

No bat check needed on this one. Seventh of the year for Luc.

Later in the game, Vitello addressed the incident and had a hilarious troll of what went down and the allegations that have been pointed at his team.

Tony Vitello on Jordan Beck being called out because of an illegal bat:

“He shouldn’t be at University of Tennessee, he forged his transcripts. He’s actually a 35-year-old man named Mike Honcho.” pic.twitter.com/ueAvxNaEWB

Ultimately, the single home run in the first inning did not matter. Tennessee won the game 6-2 and Beck had something to say about the incident.

"The bats don't matter. You could give us wood bats – it really doesn't matter with us." – Jordan Beck on Tennessee baseball's 17th win in a row pic.twitter.com/glbGlWrbC3

The Vandy Boys and Vols will square-off in Game 2 on Saturday night. I’m sure Tennessee will take extra time to make sure every bat is approved.