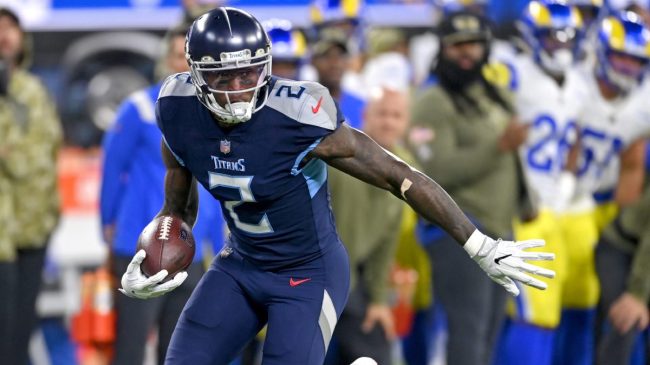 News out of Tennessee is that Pro Bowl WR Julio Jones is not expected to return to the roster in 2022.

NFL insiders Dianna Russini and Adam Schefter reported this afternoon that Jones will be released after just one season in Nashville.

Jones missed seven games last year due to injury, but he still performed as one of the team’s top receiving threats when healthy. While he wasn’t on the level of stud pass catcher AJ Brown, Jones was a reliable target that hauled in 31 receptions.

Unfortunately, the 11-year veteran may be on the back end of his career.

Jones has seen a decrease in production each of the last three seasons, dating back to his time in Atlanta. The Titans may not have wanted to take the financial risk on a player that’s been in and out of the lineup over the last few campaigns.

With the news breaking Wednesday, the NFL world is reacting.

With Jones on the move, folks are trying to figure out what the future might look like. That goes for both Jones’s new landing spot as well as how the Titans will be affected.

Check out some of the reaction below.

Deshaun Watson and Julio Jones in the A would be fun. #Falcons pic.twitter.com/CoxBl1R40m

Any and all logistics aside, I want to see Julio Jones on the Packers

Could Julio Jones want to reunite with Kyle Shanahan? https://t.co/hKwgku279x

The Rams called the Falcons about a possible Julio Jones trade last year, so obviously we can't rule them out potentially signing him as a free agent https://t.co/VOdlR2cCaP

Even a few players were recruiting Jones to their teams. Darrynton Evans of the Bears and Isaiah McKenzie of the Bills both gave a shout out to the pass catcher.

Would love to see Julio in a Chicago Bears Jersey 🤷🏽‍♂️ could be bias.. bruh STILL HIM !

@juliojones_11 you don’t have to practice with us during the week, because it’s cold. Just show up on Sundays. #Whateverittakes

Former teammate AJ Brown also reacted to the news with a message to Jones.

AJ Brown with a message to Julio Jones, following the news the Titans would be releasing Jones.#NFL pic.twitter.com/1LbMRxAjJF

Wherever Jones ends up, it looks like he’ll be a leader in the locker room.