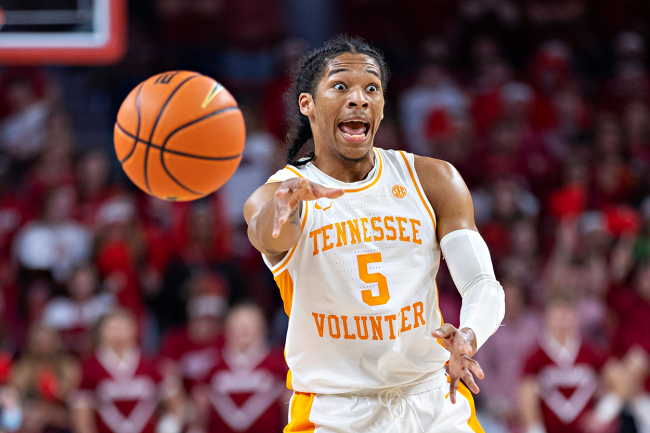 Zakai Zeigler is an inspiration and his story is a testament to everything great about sports. On Friday evening, the University of Tennessee point guard and his family moved into their new home in Knoxville and their reaction is emotional.

As a three-star recruit from the Bronx, New York, Zeiger’s incredible journey began before he even got to campus. He did not have an easy upbringing and worked extremely hard to earn each opportunity. His mother and his family sacrificed a lot so that their son and brother could chase his dream— one that ultimately paid off when Zeiger received multiple scholarship offers and committed to Tennessee.

Once Zeigler arrived in Knoxville, he immediately turned heads. Although he is undersized at only 5-foot-9, the Volunteers point guard averaged 8.8 points and 2.7 assists per game as a spark plug off of the bench. As a result, he earned All-SEC Defensive Team and All-SEC Freshman team honors.

However, even as Zeigler continued to live out his dream, adversity struck the freshman and his family. On the same night that he scored 13 points in a huge Tennessee win over No. 3 over, Zeigler’s family home in Long Island, New York burned to the ground. They lost everything.

As a result of the fire, Zeigler’s mother and special-needs nephew were left homeless. But not for long.

Because of the NCAA’s new rules on Name, Image and Likeness, Tennessee athletics was able to approve a legal GoFundMe for Zeigler and his family.

On Feb. 26, 2022, a fire destroyed the residence of Zakai Zeigler’s family in Queens, New York. His mother, who is raising his special-needs 4-year-old nephew, lost all of her belongings, including his nephew’s vital accessibility equipment (wheelchair, splints, etc).

Zakai is currently enrolled at the University of Tennessee in Knoxville, Tennessee, where he is a freshman guard on the Volunteers basketball team. The East Tennessee community has embraced Zakai in such an impactful manner that his mother is exploring opportunities to relocate to Knoxville so that the family care spend more time together and Zakai can assist with Nori’s care. In the short term, funds will be used to fill immediate needs such as temporary housing, clothing and airfare.

The goal of this GoFundMe effort is exclusively relief and recovery. The listed goal of $50,000 is an approximation, as the full scope of loss is difficult to quantify and still being assessed.

It was a remarkable testament to Vol Nation and it allowed Zeigler and his family to move into a new home in Knoxville.

They moved into their new house on Friday and Zeigler posted video from the moment that they walked through the door for the first time. They were also joined by Zeigler’s teammate and good friend, Josiah-Jordan James.

In Zeigler’s post he thanked Knoxville Flooring for the help. He also took time to thank Vol Nation.

The Zeigler’s new family home is amazing. It also allows the rising star point guard to be closer to the people who mean the most to him. And in turn, they will be able to be at each and every one of his home games.

The entire story, from Zeigler’s journey to Tennessee, to his remarkable freshman year, to the community that rallied around him and his family after losing their home is bigger than sports. It’s truly special.