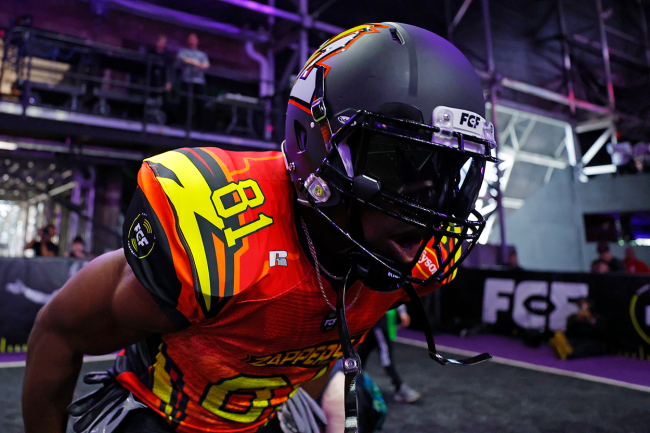 48-year-old Terrell Owens wants to let everybody know that he’s still got it. To do so, the NFL Hall of Famer joined the Fan Controlled Football League for at least a portion of the 2022 season.

Owens made his debut during the season opener on Friday night for Johnny Manziel-owned team ‘The Zappers.’

In place of his last name, Owens’ jersey read ‘PROTOTYPE81.’

Prior to the game, Owens was chopping it up with his quarterback Danny Southwick.

T.O. mic'd up building Chemistry with his Quarterback @fuboSports pic.twitter.com/i6G0fwGCn1

And then once the game began, while the opposing team was on offense, Owens told Southwick exactly how he planned to get open. He said that he was going to run a Post Corner route and told Southwick to throw behind the defensive back.

HOF WR Terrell Owens breaking down how to beat a Cornerback down field@fuboSports pic.twitter.com/NP1qSZzPhr

A few moments later, Owens ran a Post Corner route and Laquon Horton, another one of the Zappers quarterbacks, threw behind the defensive back. The five-time NFL First-Team All-Pro went up, absolutely mossed the corner, and came down with the catch in the end zone.

Owens did exactly what he said he was going to do to Southwick and ended up executing with a different quarterback. He scored his first (semi) professional touchdown since December 5th, 2020.

Here is another look at the catch from the backline angle. Owens, who still stands 6-foot-3, 225 pounds of straight muscle, put the defensive back on a poster.

If you're not watching @fcflio on @NBCLX tonight, why not?? Catch up on Terrell Owens’ return to professional football here: https://t.co/RY8ohh2BZ9

And here is what things looked like from Owens’ perspective:

After the game, which was a loss for the Zappers, Owens broke down his game.

"We got 7 more games. Always got room for improvement." pic.twitter.com/7GbvNqK9EJ