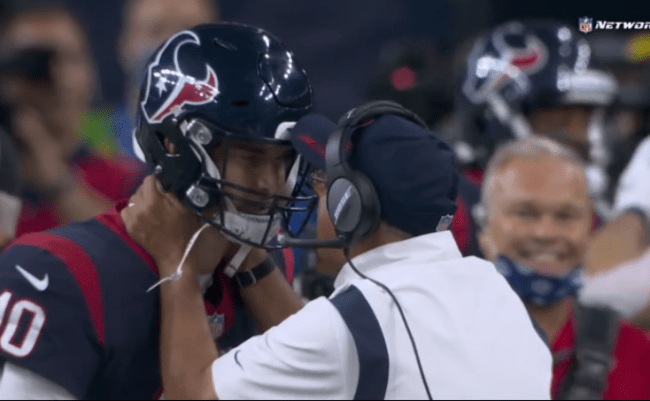 Texans QB Davis Mills and his long neck became a storyline during his first start of the season.

Before the start of the Panthers-Texans game on Thursday Night, Mills went viral when someone noticed that he has an extraordinarily long neck.

Mills went on to finish the first half with an impressive drive that ended in a touchdown.

After the touchdown, Culley went to embrace his QB and got himself two handfuls of Mills’ neck which the Internet found hilarious.

DAVID CULLEY EMBRACES THE POWER OF THE NECK pic.twitter.com/1E4ec8I3ie

is Culley choking him, or is Mills' neck holding Culley's hands hostage? pic.twitter.com/d6jolLvlgh

David Culley with both full hands on that NECK of Mills

Culley had so much neck to grab on Mills. Two full hands!!