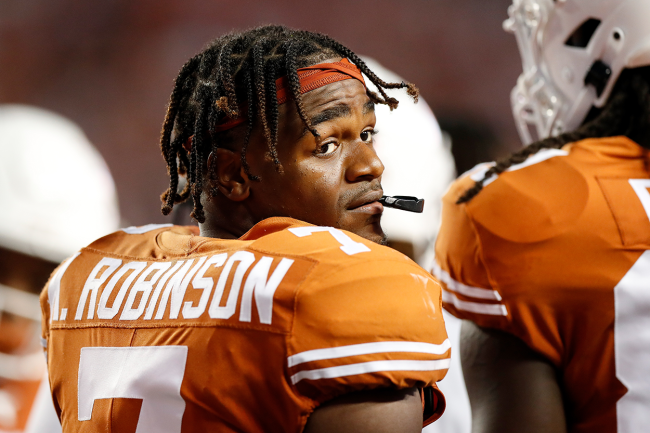 Keilan Robinson’s worlds are colliding. After transferring from Alabama to Texas, the two teams are set to play one another early in 2022 and he has a lot to say.

Robinson, a four-star running back in the Class of 2019, committed to play for Nick Saban and the Crimson Tide out of Washington, D.C. He saw limited time in eight games as a freshman but redshirted as a sophomore in 2020.

Following his second collegiate season, Robinson entered the transfer portal and committed to Texas. As a redshirt sophomore last fall, the 5-foot-9, 183-pound ball-carrier was the fourth-leading rusher on the team with 45 carries in 10 games.

Ahead of Robinson’s junior year, he projects to be the third back on the depth chart for the second year in a row. There are high expectations for the Longhorns to return to glory this fall and it starts with a crucial matchup in Week 2.

Alabama is traveling to Austin. The Crimson Tide will play in front of a sold-out crowd at Darren K. Royal—Texas Memorial Stadium.

Texas vs Alabama is officially SOLD OUT! See you in DKR 🤘 pic.twitter.com/G4PVrsHq0T

Facing each other for the first time since 2010, there is set to be a lot of chatter leading up to the game. It will dominate headlines.

In fact, it already is— at least to some extent.

As the college football season slowly inches closer, Keilan Robinson is talking big talk. He joined a Twitter space on Tuesday night and the Texas transfer had a lot to say about Alabama.

that was fun. ima do more spaces with y’all

During the conversation, Robinson said that he knows Texas can beat Alabama.

“Knowing what I know, seeing what I see every day, being here [at Texas] and being there [at Alabama], I know we can beat them boys.”

Now, of course that is what Robinson will say. He is confident in his team and did not try to stir the pot with his comments— (even though he did.)

get a life…pls. it is concerning 😂