Texas A&M Football Players And Staff Are Tweeting Eyeball Emojis After Their Game Against Ole Miss Was Cancelled, WHAT DOES IT MEAN?! 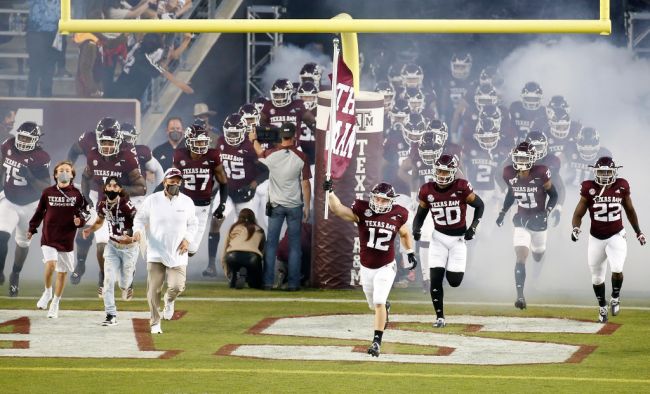 After having its game against Ole Miss postponed due to an outbreak in the Rebels’ locker room, No. 5 Texas A&M is without a set opponent for this weekend. Conveniently enough, the nation’s No. 4 ranked team, Ohio State, is also available after college football’s biggest rivalry was deemed unplayable because of a flurry of positive tests within the Michigan program. There has been a lot of conversation surrounding the possibility of the two top-five schools playing a game against one another on Saturday after BYU and Coastal Carolina set the standard with their quick scheduling last week.

Aggies head coach Jimbo Fisher addressed the idea of the two teams playing one another on Wednesday and all but shut it down, but A&M players and staff have been tweeting eyeball emojis throughout the morning.

Jimbo Fisher on today's SEC Teleconference when asked if there was any chance the Aggies play Ohio State this week: "No."

It started with quarterback Kellen Mond, who first posted at 10:00 am.

It was then followed up by a flurry of players and the director of on-campus recruiting.

The real kicker came when TAMU’s head equipment manager tweeted a photo of the team’s travel truck with the emoji.

Mond retweeted it with another set of eyes.

For A&M to face Ohio State would be crazy, unprecedented and exhilarating, but it doesn’t sound all too likely. For that to happen, the Big 10 and SEC would have to waive their rules regarding non-conference games this season and the contract would have to be finalized by this afternoon. In addition, for two teams hoping to sneak their way into the College Football Playoff, it doesn’t make a whole lot of sense to create an opportunity to lose, as opposed to pleading the case from the outside-in. In addition, Fisher discussed the difficulties from an Xs and Os standpoint.

“But on a Wednesday? I think you’re being a little bit crazy with it because you know that from game preparation and to get the quality game you want I don’t think you would do it,” he said. “There’s a lot on the line. You’d want to be prepared. To play them? Yeah it doesn’t bother me to play them.”

As of right now, the eyeball emoji trend appears to be a comical ploy to get a rouse out of the college football world and it worked. But what if it isn’t! 👀