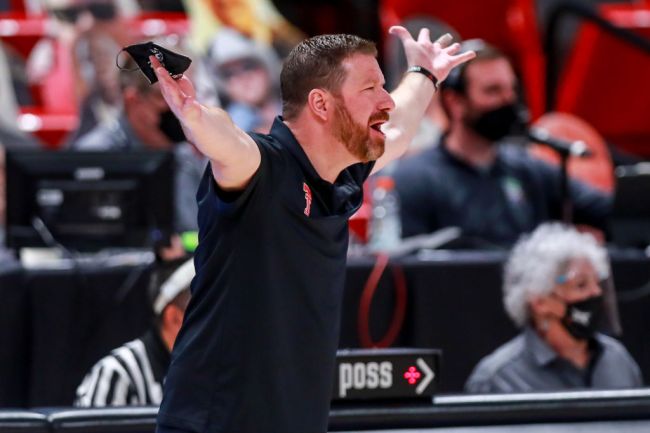 University of Texas men’s basketball begins its 2021/22 season in 11 days and will have a new head coach at the helm. After Shaka Smart left to take the Marquette job March, the Longhorns hired Chris Beard away from Texas Tech.

Beard has an extensive resume at four different stops, most recently brought the Red Raiders to four-straight (really just three because of COVID) NCAA Tournaments, and finished as the March Madness runner-up in 2019. He brings a lot of hope to the UT program and is willing to do whatever it takes to win.

The Longhorns are ranked No. 5 in the preseason AP Poll and the expectations are high. As such, Beard has asked each of his players to give up one thing of significance for the entire year.

Whether that is fast food, video games, or anything in between, Beard wants his players to know what it takes to sacrifice for wins. Of course, Beard is leading by example.

And for him, the thing that he is giving up is not trivial by any means. According to Jon Rothstein, Beard will not have a sip of beer until after the postseason in March of 2021.

Chris Beard tells me that he's giving up beer for the entire 21-22 season. Each member of Texas' program was asked to give up one thing of significance as part of "team sacrifice".

This is not the first time that Beard has done this. In 2019, the year that he led Texas Tech to the Final four, he gave up not just beer but also dessert, candy and soda.

However, it will be no small feat, as Beard is known to love a good cold beer after a long day at work.

He discussed his beer drinking with SVP back in 2019:

Chris Beard with just a next level quote on SVP tonight when asked about him going to his first Final Four compared to Tom Izzo's eighth.

"I've been to like 24 Final Fours, I was drinking draft beer in the lobbies….but I've been to the Final Four." pic.twitter.com/tpdIwjq2Mo

When Beard gave up dessert and soda in addition to beer, he found a loophole and claimed Pop-tarts weren’t a dessert item. He won’t have that luxury this season as he goes bone-dry on beer.

Can he still drink liquor?