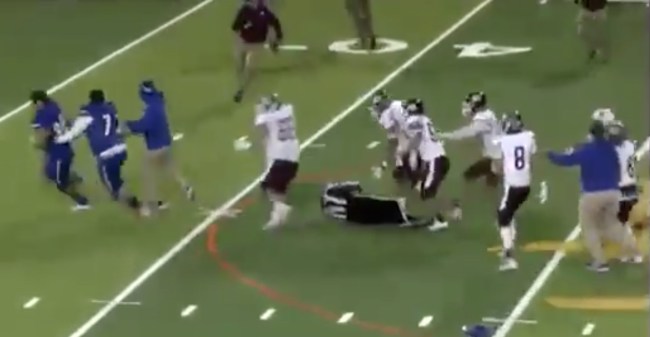 Things got nasty during a Texas high school football game between the Edinburg High Bobcats and the Phar-San Juan-Alamo High Bears on Thursday night. The stakes were high for both teams, causing palpable tension early in the first half, and that’s an understatement.

Edinburg defensive tackle Emmanuel Duron was late to the quarterback and called for roughing the passer. After the penalty flag was thrown, something occurred after the play that warranted his disqualification from the contest. Moments later, after being ejected, he ran back onto the field and laid out the referee.

Here is another angle that shows the initial hit, the second flag coming in after another referee and Duron’s teammate run in to break up some sort of skirmish off screen. An Edinburg coach comes on the field and brings Duron to the sideline, where the referee proceeds to throw him out of the game. It shows him slide past a coach trying to keep Duron at bay and run onto the field. The camera pulls away but shows both teams running over to deescalate the situation.

Duron was the Texas High School State Wrestler of the Year in the 220-pound weight class, so he’s not a small kid and running full speed at the referee in pads is not a small blow. The official stayed down on the field for a long time and a cart came onto the field. He was able to get up and walk off the field under his own power but was evaluated for a concussion in an ambulance next to the stadium. The game did resume after a lengthy delay.

As for Duron, who committed what could be considered a potential felony assault under Texas law, he was escorted out of the stadium and did not return. The senior was not handcuffed when he was led off of the premises and the Edinburg officers did not comment, as they were “not at liberty to talk about that.”