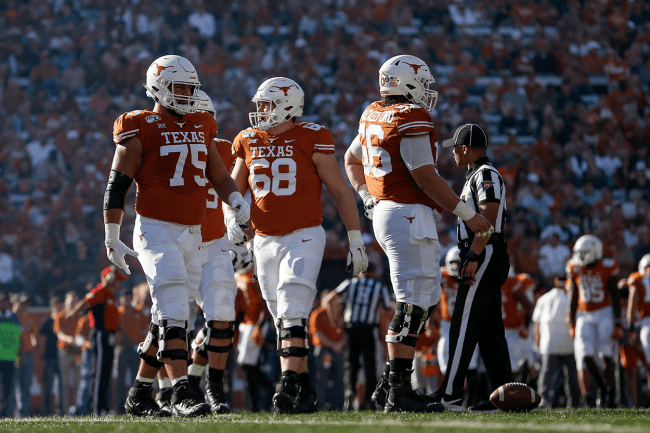 This is supposedly the year that University of Texas football is “back.” As Steve Sarkisian enters his second year as the head coach in Austin, there is a lot of hype around the Longhorns program.

After going 5-7 overall, 3-6 in-conference, and losing to Kansas, it can’t get much worse. At least, one would think.

A large part of the excitement around Texas football in 2022 comes from the team’s additions during the offseason. The Longhorns added seven high-profile transfers, including quarterback Quinn Ewers, and signed 28 true freshman.

Two five-stars, 20 four-stars, four three-stars, a kicker, and a long snapper made up the nation’s fifth-ranked recruiting class for 2022. It was a very successful cycle.

Both five-stars and five of the seemingly infinite four-stars were linemen. Every offensive lineman on the Texas roster is set to receiver $50,000 annually through NIL and the deal seemed to help bring in top talent at the position.

The Longhorns opened fall camp this week and it was hard to miss some of the newest additions. Four true freshman offensive linemen in particular stand out as absolutely massive.

All of them are no older than 19 years old, if that They are mammoth human beings.

A few of the true freshmen “big humans” #Texas signed this offseason😳 pic.twitter.com/RZsYP3uR0k

Although none of the four may end up in the starting lineup this fall, the position group is more than secured for the future. Those four alone could probably do the job of all five linemen.