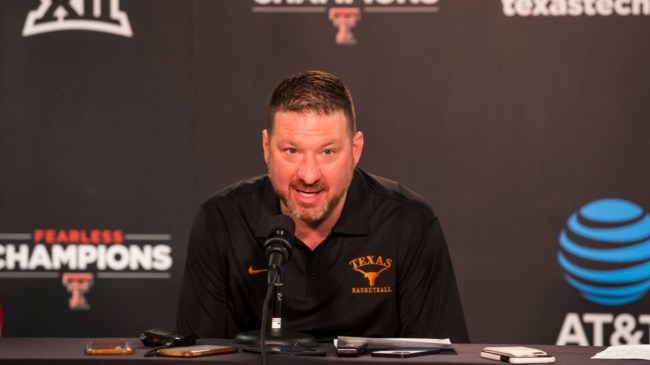 Texas’ basketball program appears to be on their way up.

Last season, the Longhorns spent most of the season ranked in the Top 25 and dominated their first round matchup against Virginia Tech in the NCAA Tournament. They weren’t able to follow it up with a win over Purdue, but it was definitely a step in the right direction after being upset by Abilene Christian the year before.

They have kept the momentum going in recruiting since then. The Longhorns put together the 6th ranked recruiting class in 2022, landing 2 recruits in the top 20, including one in the top 5.

Before today, the Longhorns hadn’t made a signing in the Class of 2023. They changed that in a big way.

Earlier today, ESPN’s Paul Biancardi revealed that Ron Holland, the 10th overall prospect in the class of 2023, is committing to Texas.

Texas lands Ron Holland, the number 10 recruit in class of 2023

Breaking: Ron Holland tells ESPN he has committed to The University of Texas.

“I have grown up in Texas and I want to be loyal to my home state. I can accomplish all my goals at home” pic.twitter.com/iM91HSj95c

Ron Holland is the top recruit from the state of Texas in his class and will be sticking around in his home state during his college career. He had received interest from some of the biggest programs in the country and received offers from Kentucky, Arkansas, UCLA, and Memphis.

Heading into his senior season at Duncanville High School, Holland is ranked as a top 5 power forward in the country.

Landing Holland is a big win for the Longhorns as their 2023 recruiting class begins to take shape.