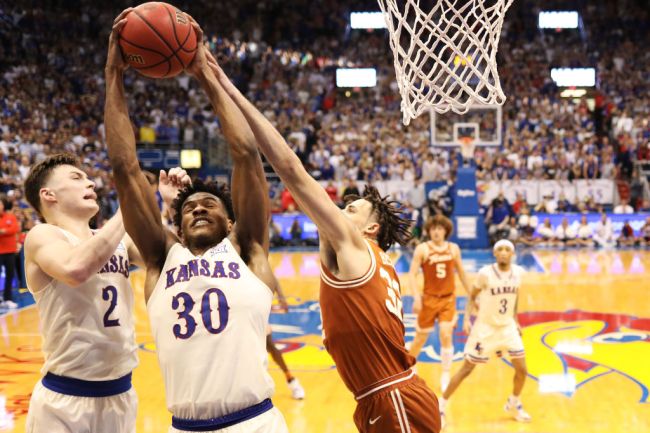 The Kansas Jayhawks secured a share of yet another Big 12 regular season title today. They did it in a closely contested matchup against Texas that required overtime to be decided. However, there are some viewers who weren’t watching to see if Kansas would win another regular season title. Their interests were elsewhere.

They only cared if Texas could cover a spread of +6.5 and they had to be feeling good about it for most of the game. Texas actually led for a stretch of the first half and even when Kansas pulled ahead later on, they never ran away with the game.

In fact, they never led by 7 at any point in the game until this moment.

To make matters worse for Texas bettors, there was a moment where they thought they had gotten their cover. With time winding down in regulation, Kansas found themselves in the midst of a broken play when the ball miraculously ended up in the hands of an open Jalen Coleman-Lands. He heaved it at the buzzer and banked in a 3 to seemingly give Kansas the win.

Unfortunately for Jayhawks fans and Longhorns bettors, it didn’t take long to determine that he didn’t get the shot off and the game would require overtime. Even in that overtime, Kansas only led by 2 with 53 seconds left. They proceeded to close the game by scoring 5 consecutive points in the last 40 seconds to give themselves their first 7 point lead of the game and the cover.

It’s the kind of loss that nightmares are made of for those who bet Texas with the points.