D-I Texas State Basketball Lost To Our Lady Of The Lake, An NAIA School With Less Than 2,000 Undergraduate Students 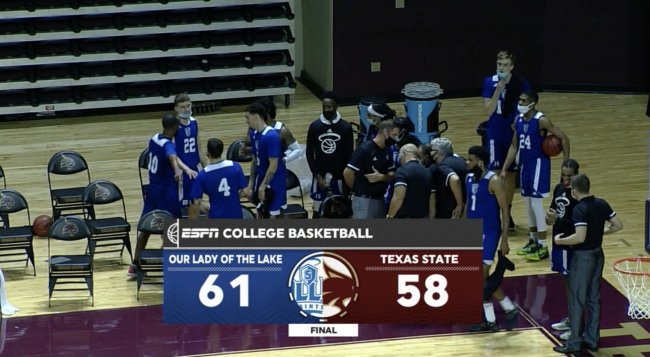 Impossible is nothing. Our Lady of the Lake University basketball defeated Texas State 61-58 on Saturday night despite its significant disadvantages.

The Lake, as it’s better known in the circles, is a Roman Catholic-affiliated school in San Antonio, Texas with a student body population with less than 1,600 undergraduates. It was founded in 1895 by the Sisters of Divine Providence, a religious institution that originated in Lorraine, France during the 18th century. As for athletics, the Saints compete on the NAIA level, which is a separate organization that oversees smaller non-NCAA programs. They are not D-I, D-II or D-II.

Texas State, a public university in San Marcos, Tex. has an enrollment of 34,187 undergraduates and competes as a Division I university on the NCAA level.

Coming into the weekend, OLLU’s only game of the season was an 84-71 loss to the University of the Incarnate Word. And while Texas St. doesn’t necessarily have its pick of the crop in the state recruiting against schools like Texas and Texas Tech, its roster boasts talent far superior to the Saints on paper. It was set up to be a potential slaughter. Buy-games like this usually are.

Throw the paper out the window.

ut allowed a 11-0 run to end the half down one. With nine minutes left in the game, they took 49-38 lead and it looked like smooth sailing. OLLU pulled back within one as the clock read 1:32 and pulled off the upset in the closing seconds. It was a feat that cannot be understated. The ultimate David vs. Goliath.

Funny enough, The Lake is 2-0 all-time in the series. Back on Nov. 24, 2010, a 127-126 overtime win for the Saints moved them to 1-0 against their in-state foes. The exact record of NAIA teams against D-I teams is unclear, but it was a big deal when Arizona Christian beat Northern Arizona University in a 2013 exhibition game. Our Lady of the Lake beating Texas State in the regular season is even crazier.