Most Major Universities In Texas Announce That Campuses Will Reopen This Fall, Hopeful That Football Will Be Played 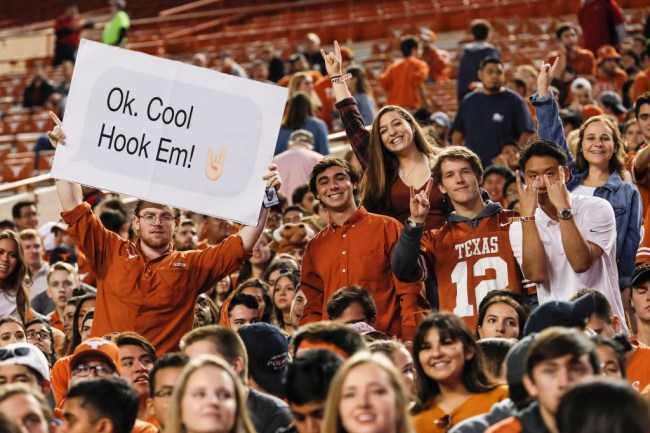 Like most universities around the United States, all Texas universities are currently closed for in-person classes due to The Big Cancel, but Texas is done with this whole waiting around thing.

According to The Texas Tribune, Texas A&M’s chancellor told all 11 university presidents in the system on Thursday that all campuses will reopen this fall and that they will be ready to play sports.

Texas A&M isn’t the only school on board with this plan, Texas Tech has also announced that it plans to resume on-campus classes this upcoming fall and get back to playing sports as well.

Not to trigger any Aggie or Red Raider fans, but big brother Texas is ready for things to get back to normal too. The Tribune reported that University of Texas System Chancellor James B. Milliken stated that it’s “pretty clear we will be open in the fall, not entirely like last fall, but not like this spring either.”

If the University of Texas gives the green light it’s only a matter of time before other state and university officials follow suit all around the country.

Baylor, which operates a bit differently as a private university, has already announced that on-campus classes are set to begin in the fall as well.

If there were odds on which state’s schools would be the first to announce campuses would be reopening this fall I think Texas’ would have been somewhere around -4,000. Plus, if any state figures out some sort of way for football to kick-off as scheduled it’s going to be Texas. That’s not a shot at Texas, either, we all want football in 2020.