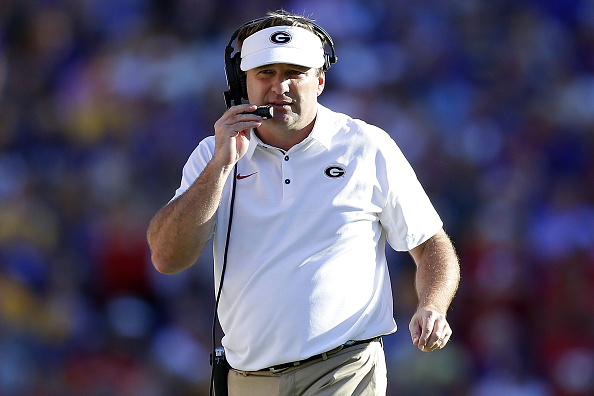 The Georgia Bulldogs had a pretty good chance at beating undefeated Alabama in today’s SEC Championship game but Kirby Smart may have gotten a bit too greedy.

Late in the fourth quarter, the UGA coach decided to go for a fake punt on 4th and 11 that was immediately stuffed by the Alabama defense.

4th and 11, Alabama has their backup QB playing, and Georgia does this at midfield #SECChampionship pic.twitter.com/etp4g7BZyY

Alabama backup QB Jalen Hurts, who replaced starter Tua Tagovailoa was carted off the field with an ankle injury, was able to take advantage of the short field and was able to score a few minutes later.

Jalen Hurts scores a go-ahead touchdown with Tua Tagovailoa cheering him on.

You simply cannot make this up. pic.twitter.com/ngRf95vtL8

Georgia eventually lost by a touchdown and Smart’s decision to go for it on 4th and 11 may have cost his team a spot in the CFB playoffs.

That Kirby Smart fake punt decision will be second-guessed for decades. Just made absolutely no sense. Can't wrap my mind around it. One of the worst big-game strategic decisions I can remember. Ever.

Kirby Smart does it again. You either blame the coach or you blame the players for choking like this. So who’s it gonna be?

The fake punt call on 4th and 11 from midfield is going to be questioned repeatedly for the next month. Thought Kirby was supposed to be Smart.

Kirby Smart legally has to change his last name for not punting it at the 50 with 3:00 to play. #SECChampionship

UGA may have fake-punted their way out of the CFP. The Sooners (or maybe the Buckeyes) will need to send Kirby Smart a thank you card.

Kirby Smart is dumb. Doesn’t matter what happens it is dumb

Kirby Smart needs to be kicked in his ass for that dumb ass 4th down call.

@FootballUGA Congratulations Kirby Smart you are officially the dumbest coach making the dumbest decision I’ve seen in quite awhile. You took the game away from your kids tonight. What a Candyass.