The Sugar Show is Back: Sean O’Malley Dazzles on the UFC 248 Prelims 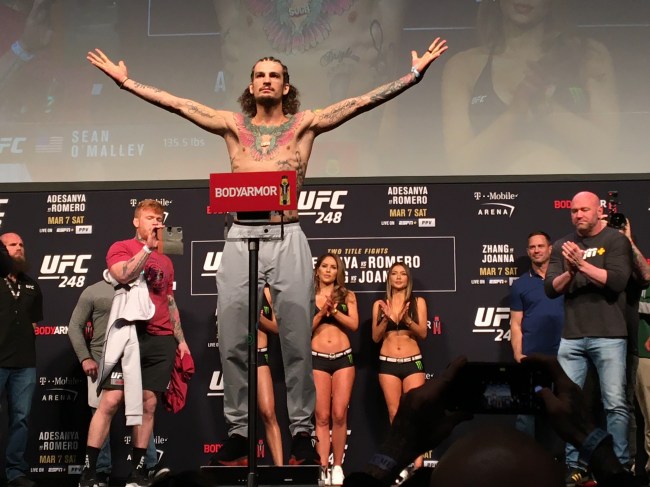 “Sugar” Sean O’Malley completed his successful comeback to the Octagon at UFC 248.

Returning to action for the first time in two years, O’Malley was absolutely spectacular in his UFC 248 performance, finishing Jose Quinonez via head kick and punches in a little over two minutes. It’s a huge moment for the young MMA star who endured through numerous battles with the United States Anti-Doping Agency (USADA) to finally be reinstated into the UFC.

Regardless of the layoff, the final result was more than satisfying, as O’Malley used a number of kicks from range to drop Quinonez numerous times in the fight. O’Malley pressured, but he predominantly played the counter striking game, executing the gameplan to perfection.

The Suga Show wasn't canceled, it was just between seasons. Welcome back @SugaSeanMMA.

Battering Quinonez around the Octagon, O’Malley secured the finish with a head kick that dropped Quinonez, following up with punches on the ground.

For Madsen, it was his Olympic-caliber wrestling, utilizing the skills that helped him win silver at the Rio games in 2016 to outlast Austin Hubbard via unanimous decision. Overall, it was more substance over style for Madsen, who used a slow and grinding approach to secure a rather unmemorable victory. Vieira on the other hand was seamless in his gameplan, employing the world-class Brazilian Jiu Jitsu that helped him win seven World Cup titles.

The victory did not come without adversity. Vieira took a front kick to the face from opponent Saparbek Safarov which caused some nasty damage to his eye. Enduring through the damage, Vieira finished the fight via arm triangle, needing less than three minutes to submit Safarov. It was a clinical performance from the Brazilian.

The UFC 248 main card starts now on Pay Per View.