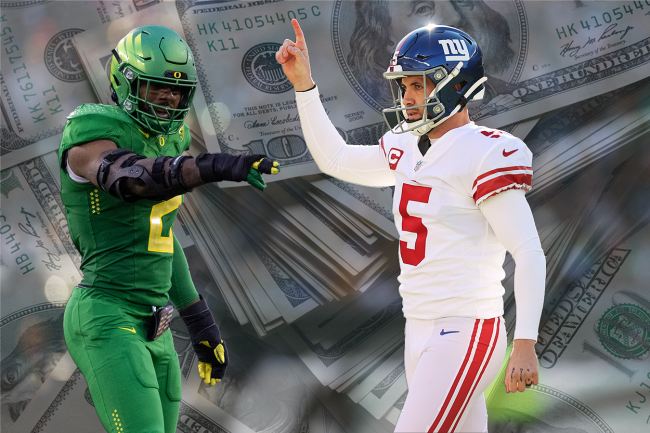 Graham Gano has worn a few different numbers over the course of his career. Most recently, the 13-year NFL veteran kicker wore No. 5 with the New York Giants since he was signed by the team in 2020.

That will not be the case in 2022. That number now belongs to rookie Kayvon Thibodeaux.

But at what cost?

Gano, who was looking at NFL mock drafts prior to the first round in April, saw Thibodeaux’s name pop up time and time again. He knew that the Oregon pass rusher wore No. 5 in college and would want to wear it again in the NFL.

“I was like, man, I guarantee if we draft him, he’s going to want my number,” Gano said during a phone interview with Giants.com.

And then, sure enough, with the team’s first overall pick in the 2022 NFL Draft, New York selected Thibodeaux and Gano knew there was a conversation to be had. Not long thereafter, he got the call about the number and the rest is history.

Typically when a rookie gets into the NFL and wants a specific number, he will offer to buy it from them for a price. Gano had a different idea.

Rather than accepting the money for himself, he asked Thibodeaux to donate $50,000 to Puppies Behind Bars. The charity provides service dogs for wounded war veterans and first responders, in addition to explosive-detection canines for law enforcement.

In exchange for the donation, Gano will change back to No. 9 and Thibodeaux will get No. 5.

“When he said he was willing to give to that, I can be No. 9 and maybe in 10-15 years when he retires and I’m still kicking, I can get No. 5 back,” said Gano. “The opportunity to give to something is exciting, and the number is obviously very special to Kayvon. While it is special to me as well, there’s a whole lot of meaning in that No. 5 to him. I just wanted to be a good teammate and also be able to support others throughout the whole process.”

The number five played a big role in the donation. It wasn’t just a random amount.

“I feel like it was where the money that Kayvon was donating would be able to make the largest impact and help the most people throughout him giving that money,” Gano said. “The whole idea behind the number five being special to myself and being special to Kayvon was being able to help five people get the five dogs and be able to make an impact in five people’s lives for the better. That was the whole goal behind that. I’m really excited about it.”

Although it was hard to give the number to Thibodeaux, Gano was happy to step aside. His new number, which he wore in Carolina, was the number that his wife wore while playing softball at Florida State.