Things Get Heated On ESPN Between Stephen A. Smith And Malika Andrews Over Ime Udoka Suspension 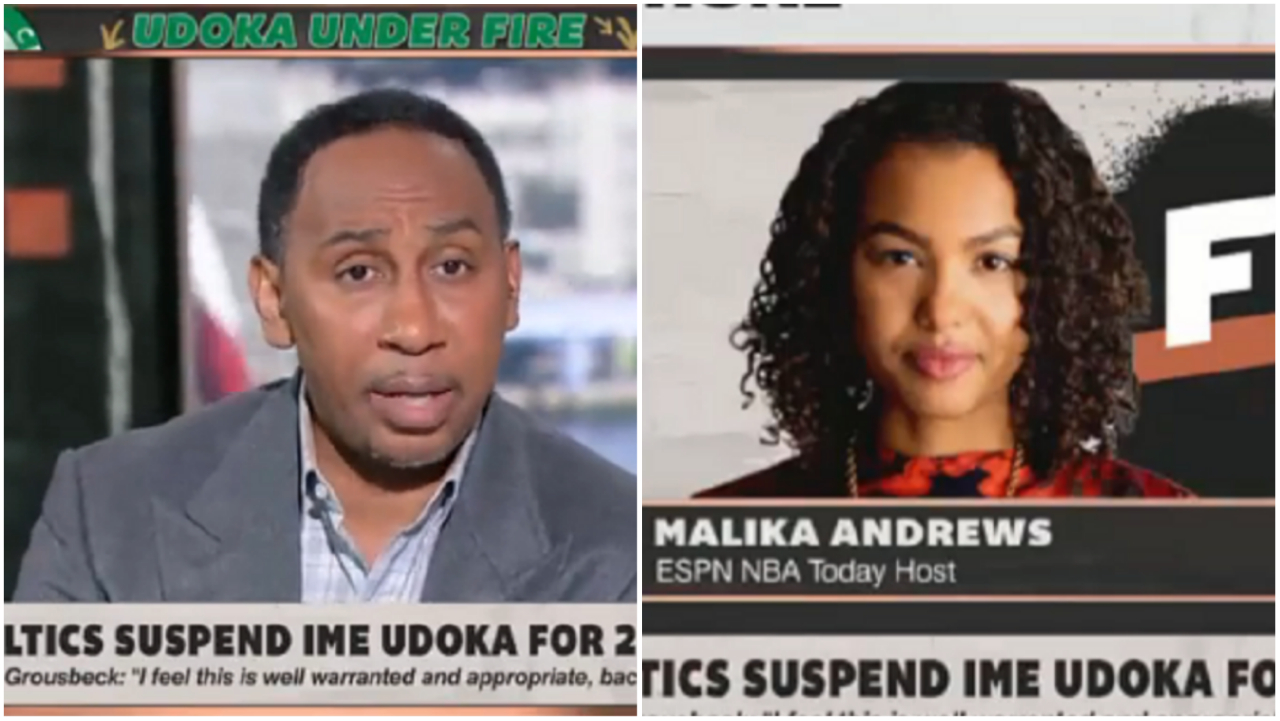 Things got a bit heated between Stephen A Smith and Malika Andrews on First Take on Friday morning.

After the Celtics held a vague press conference in which they answered minimal questions as to why they were suspending Ime Udoka, Smith pondered whether or not the woman who reportedly had a “consensual relationship” with the head coach deserved to be mentioned.

“It said in the numerous news reports it was a consensual relationship that violated organizational policies, so only he is in violation of the company policy, the woman who consented to have a sexual relationship with him is not in violation, he gets to get mentioned and put on front street, we don’t know who she is.”

This is why Malika Andrews was angry at Stephen A Smith…when he questioned if the woman involved in Udoka situation violated company policy deserved to get mentioned https://t.co/UnAku2pn7S pic.twitter.com/snJrZ4lPyj

Andrews appeared on the show shortly after those comments and accused Stephen A of pointing fingers at the woman with minimal facts in the Udoka suspension.

“Stephen A, with all due respect, this is not about pointing the finger, stop. What became apparent to me in this press conference is that we do not have all of the information here, and it was frustrating to me that the Celtics declined to elaborate or give more specifics about what the rulebreaking was.”

Malika Andrews to Stephen A Smith "with all due with respect this is not about pointing fingers, stop" pic.twitter.com/s6mV4XHcyL

An angry Smith immediately fired back at Andrews for accusing him of blaming the woman in the Udoka situation.

Stephen A. Smith: “I don’t appreciate where you’re going with that. I’m not blaming anybody but Ime Udoka…he deserved to be fired if they were going to fire him, if you’re not going to fire him, my issue is with all of this being publicized.

Malika Andrews: “You don’t think people would notice if Ime Udoka was not at (the facility).

Stephen A. Smith: “Excuse me, I listened to you, you’re the one telling me to stop on my show that ain’t happening”

Stephen A Smith responds to Malika Andrews accusing him of blaming women "I don't appreciate where you're going with that I'm not blaming anybody but Ime Udoka"
"I listened to you, you're the one telling me to stop on my show that ain't happening" pic.twitter.com/upXT50rEpc

It is worth noting that both Smith and Andrews skirted out around a report from The Athletic’s Shams Charania that claims the woman in question accused Udoka of making “unwanted comments” towards her.

The woman who had a relationship with Ime Udoka recently accused him of making unwanted comments toward her, leading the team to launch internal interviews, sources tell @ShamsCharania.

Inside the decision to suspend him for the entire season ⤵️ https://t.co/PGJ9rq0XW3