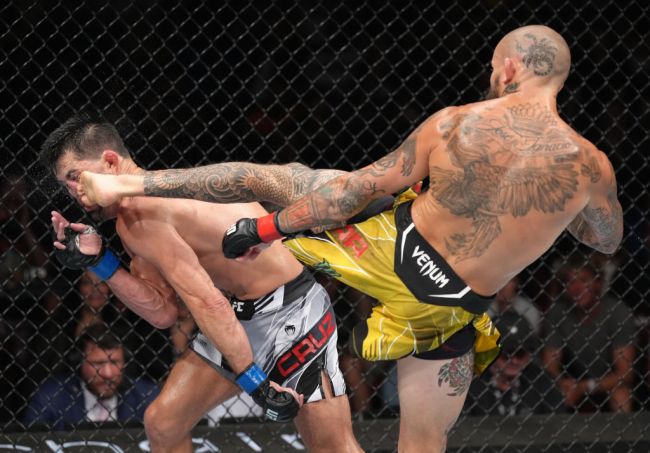 Headlining a UFC Fight Night event in San Diego, California, Vera delivered an epic head kick knockout in the fourth round to finish former champion Dominick Cruz. It was Vera’s fourth straight win inside the Octagon.

Withstanding a slow start and Cruz’ legendary footwork and blitzes early on, Vera was calm and patient throughout the first three frames, dropping Cruz on a pair of occasions.

In the fourth round, Vera found his opening, connecting with his left foot to floor Cruz.

Following up with punches on the ground, Vera was pulled off by referee Herb Dean at the 2:17 mark.

Earning a Performance of the Night bonus for his efforts, Vera cements himself as a bonafide title challenger.

While being championship ready and actually receiving a UFC title shot are two very different things, Vera has proven that he’s ready to compete at thee very highest level.

With a long leg reach, imposing Muay Thai, and a strong Brazilian Jiu Jitsu game Vera has demonstrated his skill in every facet of mixed martial arts. He’s developed into a complete package, who’s capable of standing toe-to-toe with anyone inthe division, and at this point, he’s ready to fight for the title.

Defeating two former UFC champion in the last nine months, Ecuador’s Vera has really found his form and hit his stride. Ranked fifth in the UFC’s bantamweight division, has has already fought 20 times inside the Octagon, amassing wins over notables like Cruz, Frankie Edgar and Sean O’Malley. He’s a mean and hungry fighter with a chip on his shoulder, and has exactly the type of attitude and style to elevate himself into a title shot.

At this point, the only question is can he keep winning fights in spectacular fashion long enough for a title opportunity to become available?

With the talent-rich bantamweight division currently stuck in a bit of a logjam (eight fighters in the top-15 are slated to compete in the next six weeks), it’s unclear how the landscape at 135 pounds will shape up during the coming weeks.

Depending on the outcome of a title fight at UFC 280 between champion Aljamain Sterling and T.J. Dillashaw, and a few other notable bantamweight fights (O’Malley vs. Petr Yan, Jose Aldo vs. Merab Dvalishvili, Cory Sandhagen vs. Song Yadong), Vera very may well be next in line, although, chances are, he’ll still need one more win to earn his chance to compete for the title.

Regardless, whenever it happens, Vera will be ready.

Nate “The Train” Landwehr Is Your New Favorite Action Fighter

In what is an early contender for fight of the year and round of the year (second round), the UFC San Diego co-main event between featherweights Nate Landwehr and David Onama delivered enough action for an entire fight card. It was 15 minutes of non-stop action, well, at least when Landwehr wasn’t getting the crowd fired up.

With Onama taking the first round, Landwehr ate every punch and choke attempt before turning the tides in the second frame.

Dominating the middle stanza – all three judges scored the second round 10-8 – Landwehr threw punches without caution, catching Onama cleanly on the chin and brow on multiple occasions. Landwehr also dominated the clinch, landing a series of devastating knees to Onama’s head.

Controlling the pace and action for much of the third round, Landwehr still wasn’t able to finish Onama, who landed strikes of his own in the closing minutes.

It was an all-action instant classic from two lesser-known UFC fighters, both of whom will be on the radar in the future.

Entering UFC San Diego with a bit of hype behind her, debutante strawweight Yazmin Jauregui delivered a performance that caught UFC head honcho Dana White’s eye. He even waited for her, patiently, as she exited the Octagon to deliver his praises.

Eating a few clean punches from challenger Iasmin Lucindo in the first round, Jauregui found her form in the second, stalking forward and landing strikes.

Jauregui set up her punches with the kicks, slowing Lucindo down exchange by exchange. Unable to find the finish. Jauregui, a native of Rosarito, Mexico, stuck to her gameplan, boxing her way to a unanimous decision victory.

It was a solid UFC debut from an exciting prospect.

And what did the boss man say? He expects bigger things from in the future, apparently. No pressure.