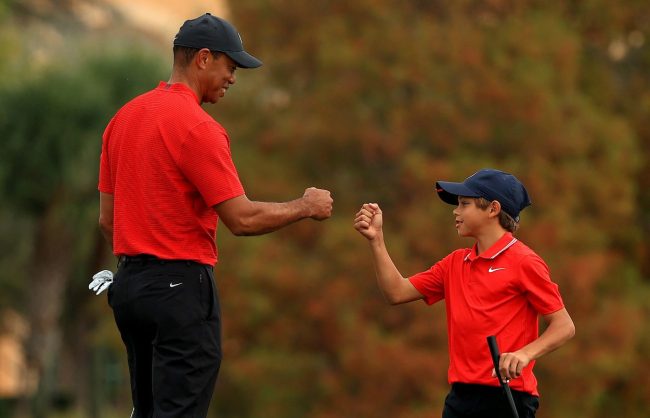 Later this week, Tigers Woods will make his return to the golf course for the first time since his near-death car accident 10 months ago. Just as he did last year, Woods will step up to the tee alongside his son, Charlie, in the PNC Championship father-son tournament.

During last year’s event, viewers couldn’t help but notice the similarities between Charlie and his father.

Each of their mannerisms on the links are nearly identical.

After the tournament, the PGA put together a great montage that showed just how similar the duo is while they play. Obviously, as the son of Tiger, it makes sense that Charlie has a great swing, but their likeness goes beyond just hitting the ball.

On Tuesday, the PGA Tour posted a video that showed Tiger reacting to the video of he and Charlie’s similarities. The Big Cat could not wipe a smile off of his face as he was watching the clip and he was visibly proud of his son and very amused by just how closely they act.

Two things in particular stood out to Tiger. He noticed that they have the same timing in their club twirls and with the pickup of the tee after a drive.

He also hilariously explained why they both rub their nose on the course fairly frequently.

”Just the nose thing we have,” he said. “We both have allergies, so we both struggle on the golf course. We get like, wind blowing and we’re both sniffing. Just that little thing that we both have.”

And then, as a side-by-side clip shows Tiger and Charlie — both in Sunday Red — sinking putts and giving huge fist pumps.

Here is the full video:

Tiger and Charlie will begin play on Saturday and the tournament will continue on Sunday. Golf Channel and NBC will be televising this year’s event.