Bettor Places Monstrous Cash Bet On Tiger Woods To Win PGA Championship, Would Result In One Of Largest Golf Payouts Ever 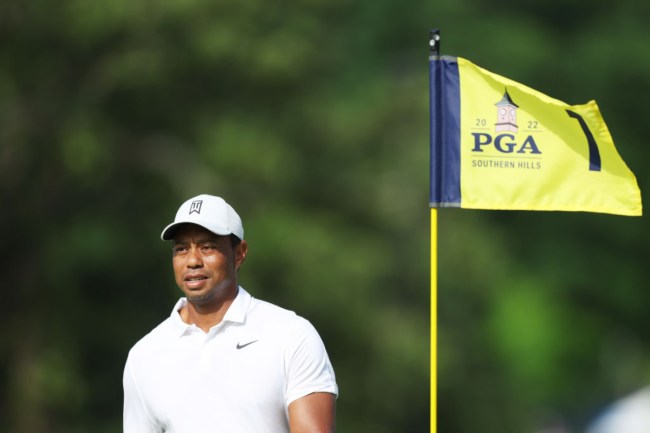 Plenty of golf fans out there like Tiger Woods’ chances to win the PGA Championship this week at Southern Hills, but one sports bettor really loves the big cat’s chances.

According to ESPN, a sports bettor placed a $20,000 bet on Woods to win what would be his fifth PGA Championship and his first since 2007. The bet was made in cash at the counter at Caesars Sportsbook at the Cosmopolitan hotel in Las Vegas.

The bet was placed with Woods having 60-1 odds to win this week, which would result in a net payout of $1.2 million, one of the largest payouts in golf betting history.

To say this is the largest bet placed for this year’s PGA Championship would be an understatement. The next-largest bet Caesars had taken up to that point was $5,000 for Jon Rahm to hoist the Wanamaker Trophy.

“We always have a liability on him regardless of his price,” Craig Mucklow, director of trading for Caesars, said about Woods. “He is the prime-time draw of all time for the bettors and likewise for the [betting] industry. We want him in the field, just not the liability.”

Caesars isn’t the only sportsbook feeling a bit squeezy thinking of Woods possibly winning this week.

“If Tiger were to win, it would be the biggest losing result in BetMGM history,” Jason Scott, vice president of trading for BetMGM, said in a company release.

Woods has phenomenal history at Southern Hills seeing as how he won the PGA Championship the last time it was contested on the Tulsa, Oklahoma track.