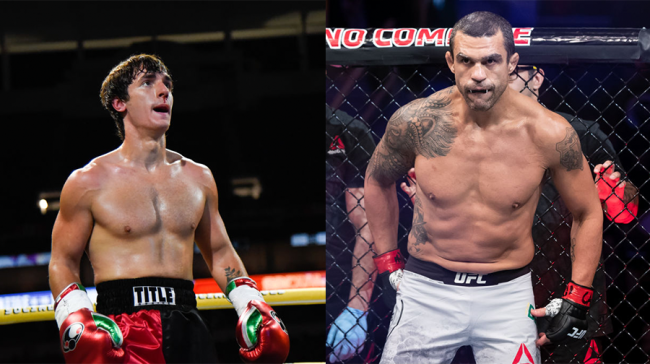 TikTok star Bryce Hall lost his debut boxing match to YouTuber Austin McBroom last month. Not only did he get his ass kicked, but he lost a casual $1 million wager that the two influencers/fighters placed on the fight.

Despite the beatdown, it appears as though he didn’t get enough. A video recently surfaced on social media that showed Hall sparring against a UFC legend.

Belfort holds (co-holds, with Derrick Lewis) the record for most knockouts in a career with 12. He stands 6-foot-0, 205 pounds of pure muscle.

Hall, on the other hand, is 5-foot-11, 150 pounds soaking wet. The video shows him taking some BIG body shots from Belfort — who was just toying with the TikToker — before he crumbles to the ground and audibly groans from the fetal position.

@Bryce Hall just boxed and wrestled vitorbelfort!! HE HAS THE MOST KNOCKOUTS IN #UFC HISTORY!!! #foryou #brycehall

Another video posted by Rory Fitzpatrick (stoprory) on Instagram shows a little bit of a different narrative. Hall, while clearly outmatched, is actually moving on the offensive and coming forward at Belfort.

Fitzpatrick’s instagram story tagged @Triller, which is interesting considering that Belfort and the social-networking and streaming app were reportedly in talks for a multi-fight deal.

Triller Fight Club was also the promoter for the Jake Paul vs. Ben Askren fight in April, so it wouldn’t be a surprise if another big-name influencer is involved.

Hopefully, for Hall’s sake, the sparring session was just for promotion and fun, because if he actually steps into the ring with Belfort, he might die.