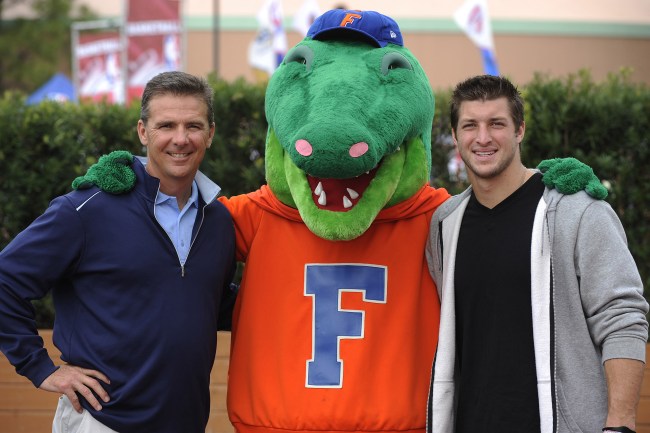 Tim Tebow is one of the greatest college football players to ever lace ’em up, with the former quarterback winning the Heisman Trophy as a sophomore in 2007 (becoming the first to ever do that at the time) and guiding the Florida Gators to two national championship wins during his tenure in Gainesville. To say the lefty, dual-threat signal-caller has a strong case as the best NCAA football player ever is an understatement.

While Tebow and his then head coach Urban Meyer eventually formed a bond at Florida that was unbreakable during their time together, it almost never came to fruition because of a shitty cell phone connection. No joke.

With both Meyer and Tim Tebow talking to FOX Sports’ Rob Stone on Ring Chronicles, the two detailed an interesting story that many college football fans probably didn’t know about: That a dropped call between the two nearly led the quarterback to flip-flop on his decision to sign with Florida in 2006 and instead commit to the Alabama Crimson Tide. Apparently, the whole thing happened just seconds before Tebow was set to give his formal commitment live on ESPN.

"When he says something, I believe it… It's real and it's authentic."@TimTebow explains why he committed to @coachurbanmeyer and @gatorsfb and how a dropped call almost changed his mind 😅 pic.twitter.com/meEaqg12LH

Tebow recalled being backstage just minutes before he announced his decision and still going back and forth between the two schools before his dad asked which one he’d pick if he had to make the choice based on one person. Tebow said he believed in Urban Meyer and wanted to play for him. He then decided he would call Alabama head coach Mike Shula to deliver the news.

“I said ‘Hey Coach Shula, I’m so sorry I’m not gonna go to Alabama, I’m gonna go to Florida,’” Tebow said. “He says ‘Timmy, you stop right there. I love you just as much now as if you came to (Alabama). You’re gonna have a great career and hopefully I’ll coach you one day.’ So I hang up the phone and I look at my dad and say, ‘That was the coach I was supposed to play for!'”

Man, tough scene, huh? Imagine being an 18-year-old Tim Tebow and thinking you were about to regret the decision you hadn’t even announced yet. It was at that point when Tebow (who was still in tears after talking to Shula) called Urban Meyer to tell him he was coming to Florida. Unfortunately, that’s when the call dropped, just seconds before the quarterback was going to go on stage to make his decision public, which caused a helluva lot of chaos in that moment.

“I’m driving home and my cell phone rings and it’s Tim,” Meyer said. “And I was like, ‘Oh man, here we go.’ He was kind of crying on the phone … and he goes, ‘I’ve decided to go —’ and right when he says that, the phone goes out.”

“I literally am dialing him back and dialing him back and they’re literally pushing me on stage. We have a full auditorium at Nease High School full of people on one side in orange and blue and the other side is red and white,” Tebow said. “And so I’m mic’d up and I go, ‘Dad, I didn’t actually tell Coach Meyer I’m going to Florida, I could still go to Alabama.’ And so the guys that could hear me on ESPN are like, ‘What? Is this real?'”

Ultimately, Tim Tebow stayed true to his word and committed to the Florida Gators, breaking a bunch of records during his time in Gainesville. But, sheesh, could you imagine had he retracted on his decision and had gone to Bama instead? Would he had accomplished more, less or the same as he did with Meyer? We’ll never know the answer, but it’s one wild “what if…?” scenario, isn’t it?