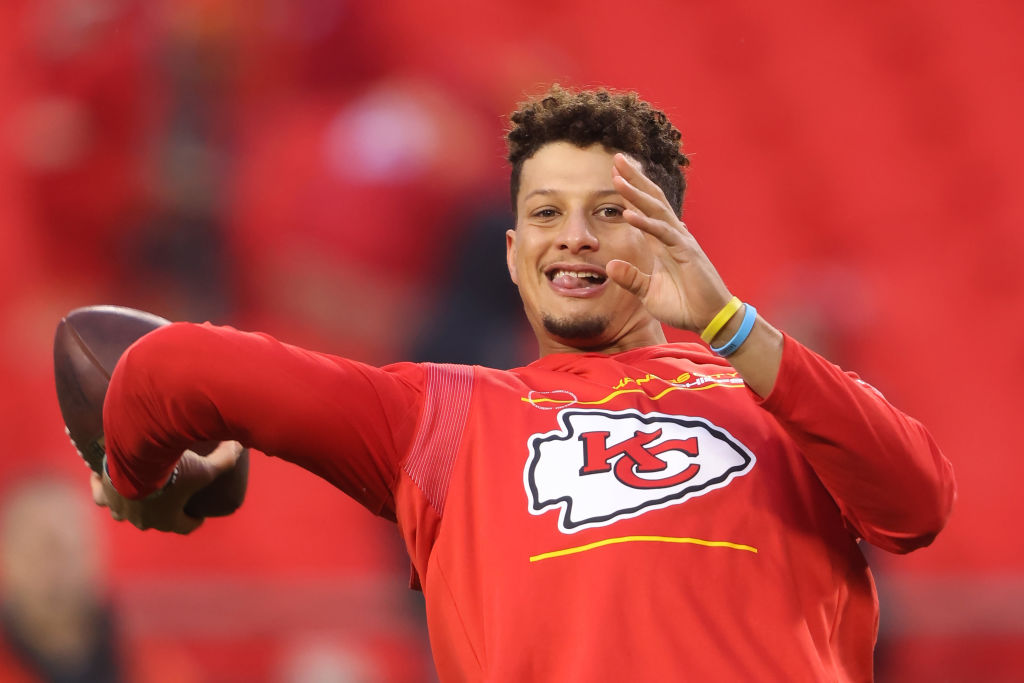 Patrick Mahomes and the Kansas City Chiefs are 4-4 on the season. They managed to pull off a 17-20 win at home on Monday Night Football against the New York Giants to get back to .500 through 8 weeks.

Chiefs QB Patrick Mahomes has had an uncharacteristically awful season thus far. Mahomes currently leads the NFL in interceptions with 10 so far this season and he’s averaging more than 1 per game. The flip side of that is Patrick currently ranks 3rd in passing yards behind Brady and Stafford and 4th in TDs behind Brady, Stafford, and Burrow.

While it’s not all ‘trouble in paradise’ just yet Chiefs fans have already started a Change.org petition asking for Mahomes to be benched.

After the Kansas City Chiefs beat the Giants on Monday Night Football, Patrick Mahomes spoke with reporters and uttered words that sounded familiar to me. He said “I think we can still be a special offense” and I immediately thought I’d heard that before. As it turns out, Patrick keeps using that quote every single year.

Also, let’s take a moment to recognize that with Mahomes leading the league in interceptions the Chiefs’ offense IS ALREADY special. He’s bestowed that honor on Kansas City so I’m not sure what this “can still be” talk is all about.

As I alluded to above, ‘Special’ is pretty much the only word Mahomes has to describe his team’s offense. Don’t believe me? Let’s take a look at the timeline.

Mahomes entered 2018’s training camp as the starter for the first time (it was a battle in 2017) and Patrick told reporters he thought they could be ‘special’. The Chiefs went 12-4 that season and 1-1 in the playoffs:

“We’re going to be really special.”

Patrick Mahomes has high hopes for the #Chiefs offense in 2018. We discussed that, plus how his first camp as the starter, how he responds to mistakes and more on @nflnetwork pic.twitter.com/KBsWcHxNHs

How special is Patrick Mahomes and this offense. Wow!

Cris Carter on Fox Sports says the Chiefs offense is “going to be a special offense”. Mahomes went 11-3 in the regular season and 3-0 in the Playoffs.

"The Chiefs offense is going to be a special offense. … Patty Mahomes, let's not be mistaken, he is the real deal. He can throw sidearm, he can go over the top, he can throw a fastball. Andy Reid, when he was selling us on Patty Mahomes, he undersold us." — @criscarter80 pic.twitter.com/MZOeKiCL0L

A month later, Mark Ingram acknowledged just how special Mahomes and the Chiefs are but admitted the Ravens could beat them. The Chiefs would win that matchup 33-28.

"We know he's a special talent but we have a great defense. I believe they'll do enough to slow that offense down."

@markingram21 has no doubt that the @Ravens have what it takes to stop @PatrickMahomes and the @Chiefs. pic.twitter.com/9q1k4hSxqA

Terrell Suggs joined @ArashMadani to talk about winning the #SuperBowl, being a part of this team, and how special Patrick Mahomes and the @Chiefs offense is. pic.twitter.com/93SM6mKEdQ

Did someone say ‘special’?

This is rare anticipation and trust from Mahomes. The poise to deliver a ball with touch under pressure like this is special. Excellent finish by Demarcus Robinson. When people would list off the weapons on the Chiefs offense, no one was bringing up Honey Thunder. They are now. pic.twitter.com/G5pnFQZq8A

Patrick Mahomes was something special in 2018, and was clearly KC's highest-graded player on offense pic.twitter.com/KmXkfrCSKz

I been going back and forth all week with this game. Patrick Mahomes and that offense is so special but my right mind won’t let me bet against Brady in Jan. Gotta take NE in a close one.

Sammy Watkins on similarities between Lamar Jackson and Patrick Mahomes: "I just think they're just special at making their teammates and offense better. The way they scramble, throw the ball, all this freakish stuff that pretty much not all QBs do."

Things like this is what make this Chiefs offense so special. Zone, man, bracket, etc.. whatever a defense wants to do, even when well called/executed can run into the talent buzz saw of the Chiefs offense.

– Y-Wrap from Kelce who shouldn't move like this
– Mahomes' anticipation pic.twitter.com/lQqbZcnxkj

Well we’ve just seen something special. What an effort and achievement from Patrick Mahomes and this Chiefs offense. A very special streak of drives that’ll be remembered for many years to come.#nfl #divisionalround #chiefs

Now that Patrick Mahomes is facing adversity for his first time as the Kansas City Chiefs starter and clawing back to .500 against the Giants, Mahomes wants to feel special again.

November 2021: Hoping to be special again

Mahomes: “Hopefully we can correct the turnovers and still think we can be a special offense.”

Patrick Mahomes: I think we can still be a special offense. https://t.co/85TiVZGq3a

“Even the Titans game the week before, we’re going to battle to the very end, I promise you that. You’re hoping that the turnover luck flips the other way, but that comes with us trying to execute at a higher level. We had the ball that bounced up in the air and was picked off. Then Travis, who doesn’t fumble, he fumbled. Like I said to Trav and all these guys, ‘I’m going to keep coming right back to you. I’m going to throw it to you and let you make a play because I have that trust in you.’

“I think as the season goes on, hopefully we can correct the turnovers and I think we can still be a special offense.”

Mentally, we are here:

I’m no oddsmaker so I won’t set the line on whether the Kansas City Chiefs and Patrick Mahomes will rebound and achieve that mythical ‘special’ status they desperately crave. I will admit I’m very much rooting for Mahomes to turn it around as I’ve got him as the QB on my fantasy team. I had Jameis Winston as my backup but he just went down for the season so I’m now fully relying on Mahomes to put up some huge regular-season numbers and then lose to my Tampa Bay Buccaneers in the playoffs again.