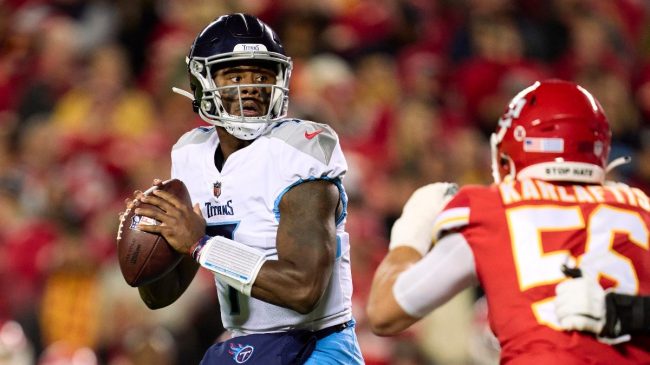 The Tennessee Titans’ offense folded in the second half yet again. It’s been the theme for this group all year long. It doesn’t help that the play-calling from offensive coordinator Todd Downing is one of the worst in the league either. Even so, the fanbase is supportive of Malik Willis, even after he digs the wide receiver core.

According to A to Z Sports, In the post-game interview, the Titans quarterback was asked “When you were scrambling in overtime avoiding sacks, what was going through your head?” Willis quickly responded, “I hope someone gets open soon. I can’t keep doing this.”

In one play in the final drive in overtime, the Titans wide receivers can be seen running downfield trying to block a defender. Meanwhile, third-string tight end Geoff Swaim pulled out of his block late for a called screen pass to him. Malik Willis had no chance, as nothing worked in his favor in the second half and overtime.

The atrocious play call there is an entirely separate issue. However, many Titans fans are showing support for the rookie quarterback. Anybody in his situation, no matter their experience level, would likely struggle to throw the ball in this offense.

I have no problems at all with him saying out loud what everyone in America saw.

Even Mike Vrabel is tired of the Titans’ wide receiver group.

I have no problems at all with him saying out loud what everyone in America saw.

Tennessee should be regretting not paying AJ Brown the contract he asked for.

The pitchforks are out for JRob the most I’ve seen since the night of the AJ trade.

The Titans must address the wide receiver situation in the offseason.

Not mad at all at him for saying this. What he said is true and blatantly obvious to anyone with a pair of eyes.

Keep an eye on this team for the remainder of the season. Tennessee tends to compete well in most of their games. However, if the passing game doesn’t improve then it could turn into a long year for the Titans.