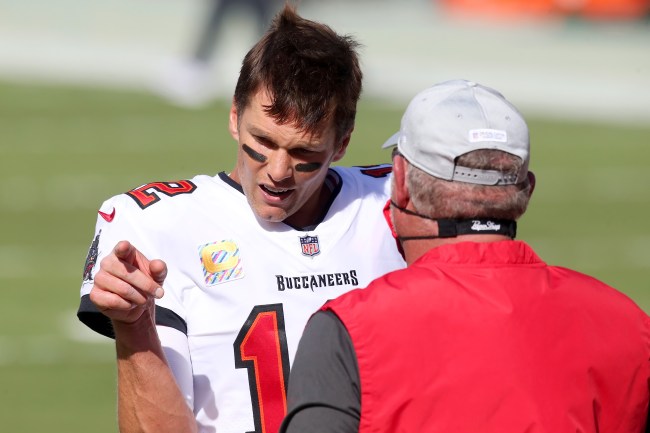 The 7-5 Bucs are going to be battling for their playoff lives in the second half of the season and it seems like the pressure is starting to heat up in Tampa Bay.

Last week, ESPN’s Dan Graziano reported there had been some tension between Brady and head coach Bruce Arians this season.

.@DanGrazianoESPN is hearing rumors that the tension between Tom Brady and Bruce Arians might be real. pic.twitter.com/vXSAAgA2SA

Brady’s former Patriots’ teammate Rob Ninkovich went on to blast Arians and felt the Bucs head coach should be fired because he’s “not cutting it.”

After the Bucs’ latest loss to the Chiefs, Brady was straight up asked about Ninkovich’s comments on Arians during the team’s postgame press conference. Brady answered the question and then abruptly ended the press conference after only talking to the media for about two minutes.

Question: Hey Tom, as you head to your bye week, there have been some folks who have had some chatter about, you know, you still look like you are running someone else’s offense. One of your former teammates even said on TV that you need a new head coach. What do you make of all of that?

Brady:“It’s just external noise that when you are losing, that’s what you deal with,” he told media, \ “I love playing with the guys that I play with — the coaches, the whole organization has been unbelievable. I think I have to go out and certainly do a better job the last four weeks of the year. So, I appreciate it. Let’s have a good week.”