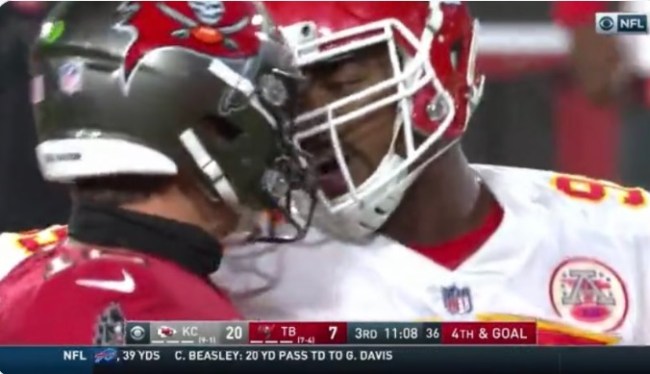 After an incomplete pass on third down near the red zone that led to a field goal, the Bucs QB ended up getting into it with the Chiefs’ defensive tackle.

This isn’t the first time Brady and Jones have gotten in each other’s faces. Last year something similar happened between the two players.

Chris Jones has something to say to Brady on the way by, and Brady gets up and gets in Jones’ face pic.twitter.com/NjVaJEboo6

At the time Jones said that he loved getting under Brady’s skin.

“I got him to say something back to me,” Jones said. “He cussed me out, but I loved it. That’s the first time I’ve seen Brady cuss a D-lineman out, so obviously, I was doing something right.”

I’m sure Jones loved pissing Brady off once again.