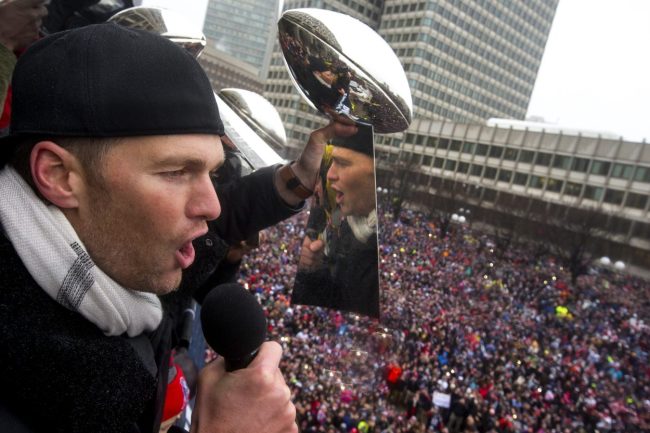 Just under five years after the New England Patriots beat the Atlanta Falcons in Super Bowl LI, Tom Brady has revealed the team’s motto from that kept them motivated during the 2016 season. Obviously, it was more than just a motto that led the greatest dynasty in football to its fifth NFL title since 2000, but it was the mindset that helped propel them to victory.

In episode seven of Tom Brady’s ‘Man In The Arena’ on ESPN+, Brady explained the acronym ‘FEA.’ It stands for “F**k Em All.”

Entering the season, after years of scandal (deflategate, etc.), the Patriots were not well-liked. They had won a Super Bowl two years prior and nobody wanted them to win. The media was against them, NFL fans were against them, everybody was against them.

Meanwhile, the team did not care. The players in New England knew that nobody liked them anyway, so there was nothing to lose.

And they didn’t. The Patriots went on to win 14 of 16 games, ran through the playoffs and came back from 25 points down to beat the Falcons.

Hearing Brady break down the full, expletive-laced mentality is awesome. Here is Brady talking about it on the show:

“FEA man, f*ck em all man. They ain’t cheering for ya anyways so you may as well go out there and win.”

In a lot of ways, Brady is held on a pedestal. He is the G.O.A.T. and rarely lets loose in public.

His diet is constantly under scrutiny and he doesn’t always seem human. He often seems calculated and buttoned up. Part of that is the Belichick way.

No matter what it is, it’s always fun to hear him curse. FEA is going to be a constant part of my vocabulary moving forward.