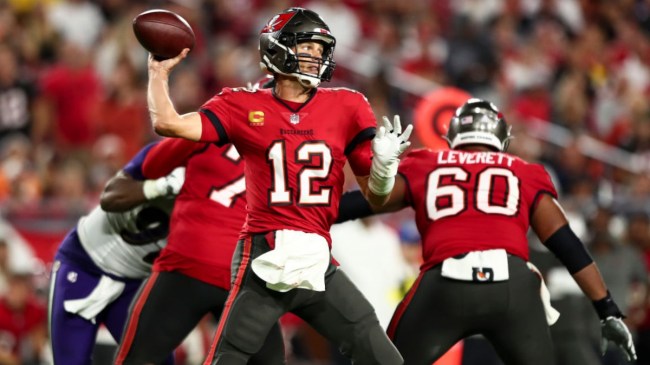 There are very few athletes in history that have dominated the record books in their sport like Tom Brady.

If you were to scroll through the list of records on Brady’s Wikipedia page, you’d probably start to get bored before you made it through the section with the regular season records.

In total, Brady holds over 100 records between NFL records, New England Patriots records, and Tampa Bay Buccaneers records. Those include most passing touchdowns, most passing yards, most wins, and most Super Bowls.

It would be easy to believe that he is running out of history to make. Well, it turns out that’s not the case as he has the chance to make history once again this weekend.

The Buccaneers take on the Los Angeles Rams on Sunday afternoon in a matchup between two struggling teams that were expected to be contenders once again this season. Heading into the game, Brady has 99836 career passing yards between the regular season and playoffs.

That puts him just 164 yards away from becoming the first player in NFL history to throw for 100000 yards in his career.

Brady breaking that record this weekend should just about be a sure thing. Even in a year where the Bucs offense has struggled, Brady has yet to have a week where he threw for less than 190 yards.

The most impressive thing about this stat is that isn’t anybody else who is even close to reaching 100K. Drew Brees has the 2nd most career passing yards and he hasn’t even reached 90K.