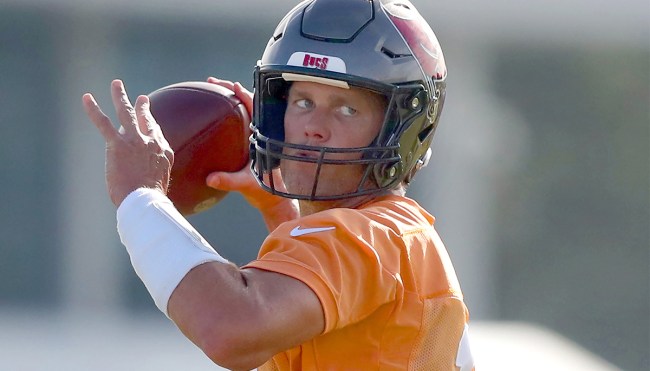 Tom Brady has absolutely nothing left to prove over the course of an NFL career that has spanned more than two decades, but the fact that he decided to return for a 23rd season after prematurely announcing his retirement earlier this year tells you everything you need to know about his passion for football.

The 45-year-old quarterback is a legendary competitor who hasn’t let many things stop him from stepping on the gridiron. As a result, the fact that he’s recently missed multiple practices as the Buccaneers gear up for the regular season seemed fairly out of character, and the team citing an unspecified “personal matter” as the explanation only helped to fuel speculation and give some people cause for concern.

Brady was absent once again when Tampa Bay convened for training camp on Thursday, and all eyes turned to Todd Bowles when he sat down with members of the media after promising to address the situation in a bit more detail.

While that session did leave a bit to be desired, Bowles revealed Brady has been given permission to take an extended leave of absence and is expected to return shortly after the Bucs face off against the Titans in a preseason showdown on August 20th (although he declined to definitively state a return date—or even guarantee Brady will start Week 1).

Here’s what Todd Bowles said about Tom Brady being away from the team until after next week’s game vs. Titans. pic.twitter.com/Y55qLMQgxB

Coach Todd Bowles said Tom Brady won’t be back until after the #Titans preseason game, which is on Aug 20. https://t.co/mkZ0aXab23

Bowles said he has a “pretty high” level of confidence Brady will be back and playing in season opener in Dallas. Later said he didn’t have doubt, said “pretty high” again.

The head coach said Brady discussed the planned hiatus with the team before training camp commenced and once again cited an unspecified “personal issue” while stressing the break had nothing to do with the QB’s health.

I asked Bowles if it was health related for Brady and he reiterated that it is a “personal issue.” Bowles said he does not believe this will impact the progress the offense is making.

It’s safe to assume there’s a reason Brady and the Bucs have declined to offer more details concerning what appears to be a private matter. Of course, that has naturally resulted in tons of speculation concerning the real explanation— although every theory that’s currently out there right now is exactly that: speculation.

Hope everything is ok with Brady and his family. Bucs LB Devin White says, “On the inside we know what’s going on. We know our quarterback’s good. We’re just praying for him and let him handle his business.”

Live look at the National Media and #GoBucs fans trying to figure out why @TomBrady will be away for a little bit.#NFLTwitter #NFL https://t.co/8VEVgE9dJ4 pic.twitter.com/y9XpiQPAFL

So the league says the Dolphins tampered with Tom Brady.

Brady was reportedly offered ownership in the Dolphins. Then he retired. An investigation starts and he goes back to Tampa.

Now the Bucs are having joint practices with Miami and Brady is away from the team for 11 days.

It’s hard to imagine more details won’t emerge at some point in the coming days, but we’ll just have to wait and see.