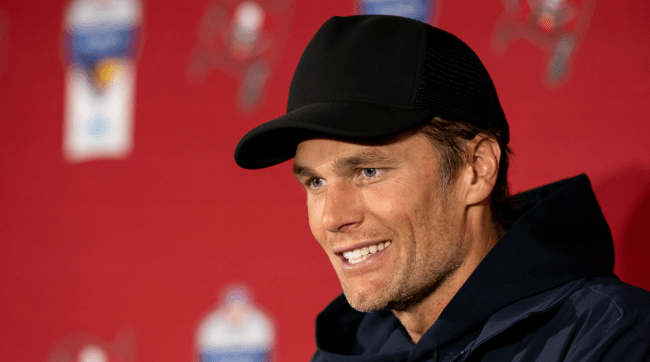 Tom Brady explained what went wrong on the trick play where he lined up at wide receiver on Sunday and his explanation was as almost funny as the play itself.

Gisele was right…Brady cannot throw and catch the ball pic.twitter.com/gxKzvhreqP

In case you missed it, on Sunday during the Bucs’ game against the Seahawks in Germany Tampa Bay lined Tom Brady up as a wide receiver on a play in the third quarter and tried to have running back Leonard Fournette pass it to him.

It went about as poorly as it could have possibly went.

Not only was the pass not completed, Brady fell down while trying to stop and catch the ball, leaving Seahawks rookie cornerback Tariq Woolen wide open to intercept the pass.

The only saving grace on the play was that when Brady fell down his legs ended up getting tangled up with Woolen’s (earning TB12 a 10 yard penalty for tripping in the process) or it very likely would have been a pick-six.

Tom Brady in the US: Not a WR
Tom Brady in Germany: Still not a WRpic.twitter.com/P4aAVKjKq0

Thankfully for the Bucs, they still won 21-16 so Tom Brady could laugh about it after the game while he explained what went wrong.

“I was hoping to be wide open, and I probably was on the first one, and I think they were pretty clued in on the second one.

“They said ‘Cover him! Cover him!’ and I was on the sideline and tried to yell, ‘Lenny, no!’ But it was too late, and the ball went up in the air and I was trying to just, whatever, jump up and knock it down. But I ended up falling on my face,” Brady told the Tampa Bay Times.

“Unfortunately, that cornerback is a former college receiver who jumps a lot higher than me and is much more athletic.”

Five plays before the ill-fated pass attempt, Fournette took a direct snap and ran the ball with Brady out wide.

“Had (Brady) not slipped, you would’ve seen his 42-inch vertical,” Tampa Bay coach Todd Bowles joked after the win.

If I don’t slip that’s Randy over the top for 6… https://t.co/HzATNjIW8A